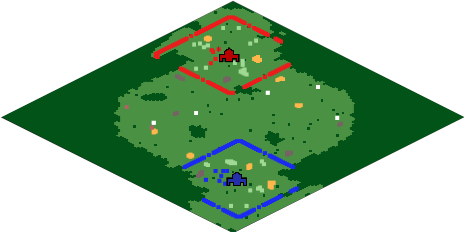 Arena is an Age of Empires 2 multiplayer map. All players start with pre-built stone walls around their starting Town Center. This setup leads often to longer games as early rush strategies are less effective. It is the classic map when it comes to so-called closed maps, that is why this map has always been in the ranked mappool for AoE II DE next to Arabia.

The latter two features distinguishes Arena heavily from the other well-known map Fortress, where you also start with a stone-walled base.

The layout of the map leads to a general delay of any aggression into Castle Age due to having a safe starting base and safe access to ressources. Therefore, a Fast Castle-strategy is seen the most frequently. Here specifically, the players try to get to Castle Age as fast as possible to gain access to Castles, Siege Weapons and Monks to acquire map control and breach the opponent's walls. A Siege-Monk rush shortened Smush or a Castle-drop strategy can be usually seen after having reached the Castle Age. The fight for Relics is an important aspect of Arena-games, because their possession and gold income can be decisive in the Ultra-late game if the mineral ressources have run out.

Additionally, the center of the map is rather open but narrow due to the thick surrounding woodlines, which explains the name Arena. This makes the map rather one-dimensional and narrows down the possible angles of attack. With that, one or two well-placed castles can save your base entirely and also grant control over ressources in the center of map, which can benefit civilizations with good defensive possibilities. To generally raze those castles, Imperial Age siege units, i.e. Trebuchets, Bombard Cannons or Siege Rams are needed. In particular, the access to strong Late-game options such as Bombard Cannons specifically can be crucial at that stage of the game, since those cannot only destroy buildings, but also defeat other siege weapons.

With the above, one can deduce which Civilizations are generally good on Arena. A good Arena civilzation combines the following:

Accordingly, to the best Arena-civilizations are counted (alphabetical order):

On the other hand, civilizations that have a hard time on Arena are among others: