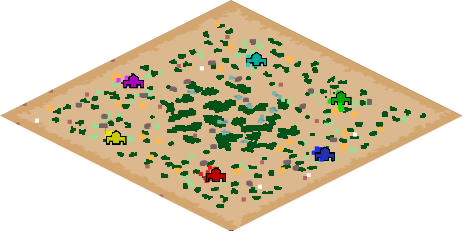 Atacama is an Age of Empires II multiplayer map created by Mr ED.

An open map whose central feature is the massive woodpile in the middle. After having been used in various tournaments since its release, Atacama also has become a common Empire Wars tournament map. Wood around the player is sparse which encourages early conflict. However, because of the map's unique layout, players typically spawn further away from one another than a typical Arabia matchup.

Aside from the center, good woodlines are impossible to find and players will likely suffer inefficiencies if they fail to contest the middle. The amount of starting trees has two consequences: wood workers will be exposed in the middle and it is impossible to wall a base. Consequently, map control and feudal play is an absolute must. Earlier pressure is preferred, so drushing, Man-at-Arms, and Scouts are popular opening strategies along with towers and archers used later to pressure the center. In Castle Age, locking down the center becomes more important thus it is a popular place for Castles, Kreposts and Town Centers. In order to exploit the openness of the map, mobile units (like Knights, Light Cavalry, Cavalry Archers) see heavy play. For less mobile units, Atacama provides a suitable environment for sneak buildings given all of the exposed resources at a player's base. Strong/Weak civilizations on Atacama: ...