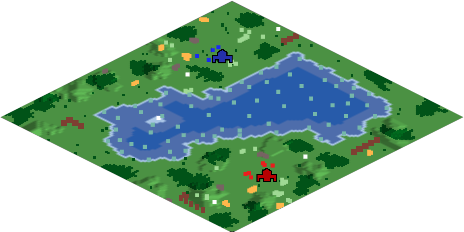 Baltic is an Age of Empires II multiplayer map.

An ocean with peninsulas and sheltered bays.

Baltic is a sea surrounded by a medium-sized piece of land on all sides. Baltic is a map which emphasizes good coordination between teammates and a player's navy and army. As noted on the map above, the strips of land separating the players are razor thin.

Fish is relatively abundant in the sea, so it is a highly reliable source of food and should be preferred over Farms in many situations. The start-up for each player is standard, with a standard set of resources (2 aggressive huntables, 3-4 passive huntables, 8 small herdables or 6 cows, 6 Berry Bushes, normal amounts of stone and gold). Wild predators are absent on the map and the set of Relics is standard (5 in a 2-player map).

It has the in-game map tags of "Water" and "Open".

A player needs to focus on both land and water in order to emerge victorious from the battle. Focusing food production on Fishing Ships rather than Farms is a good way to prevent overstraining wood economy.

As the teams are divided on land by narrow strips of land, Walling those places can be a good way to limit the opponent. After walling off an opponent, a player should focus on cross sea attacks using transports and Galleons, or placing military facilities on the land border.

Booming and turtle strategies are very effective on Baltic. Early land rush standard strategies (infantry, cavalry or archer rushes) may work only if the opponent forgets to wall the narrow points. Because of this, Galley rushes and land-to-rush strategies may be preferred.

Civilizations with advantages include:

Civilizations that may struggle: