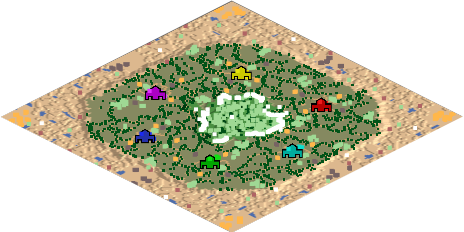 Danakil is an community made random map in Age of Empires II created by Zetnus and Huehuecoyotl22. It was created for the World Desert Championship.

Players spawn in a circle on open deserted farmland, with some scattered trees and bushes. Each player has standard starting goats and ostriches, but no boars. Instead of that 4 farms. Player gold and stone is less than standard. The outside area of the map is a tree-less and rocky plain with rich stone and gold deposits close to lava pits (4 each), while the center features an element typical for Ethiopia: a church forest.

The map has 2 unique mechanisms which follow the spirit of the tournament: The bushes scattered around the player starting areas automatically regrow a few times once fully harvested. In addition to that, the center's church forest and a few other patches bear the opportunity to plant trees. By working on the saplings (represented by relic-looking objects), you will plant a new wood-rich tree once the "relic" is destroyed. These trees can be harvested once, but not completely (once the 300-wood planted tree is at 0 wood, an unharvestable tree spawns). These mechanisms provide an additional wood source in case of a long game, however, they don't change standard gameplay in an average game.