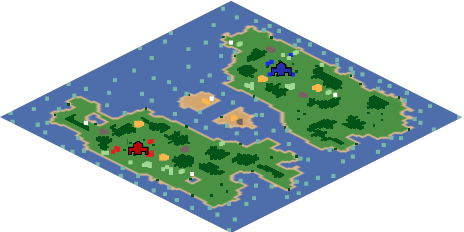 Islands is an Age of Empires II multiplayer map. It is the most traditional water map in the game. Starting with the Definitive Edition of the game, the 2 islands with additional gold and stone are always placed in the center of the map. Originally the could appear anywhere, even behind a player's land. Island shapes, fish, relic and wood distribution between players or teams have become more balanced too. In recent tournament versions usually 1/5 relics spawns on one of the neutral islands.

Before the introduction of fire galleys, Vikings were the predominant civilization choice on Islands because of their cheaper docks and warships, resulting in many Vikings mirror matches with extensive galley micro wars. With the HD Edition and Definitive Edition, Portuguese and Italians have become the most frequent choices.