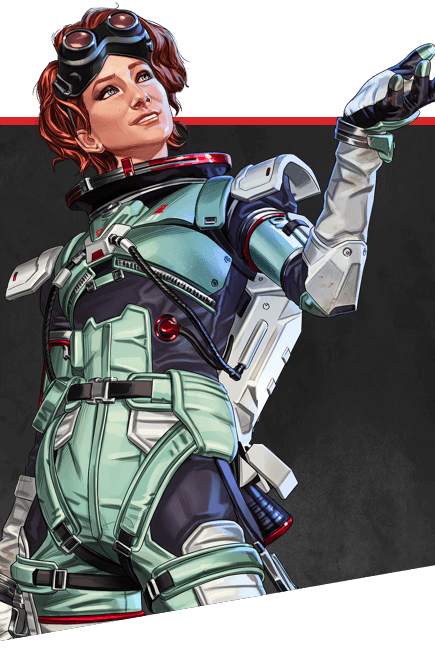 "Horizon"is a Offensive-Type legend in Apex Legends. This legend is released as a part of Ascension season. Players can unlock Horizon with 12,000 Legend Tokens or 750 Apex Coins ($9.99 USD). The legend is not bound to the Ascension battle pass.

Almost a century ago, the Outlands were dangling on the edge of a cataclysmic energy crisis. Dr. Mary Somers, a charmingly eccentric astrophysicist, was hired to find a solution. Mary moved her family to the scientific research station on Olympus and set to work.

With the help of her apprentice, Dr. Reid, Mary discovered Branthium - an element she was convinced could be the key to limitless energy. But Branthium can be found only on the accretion disk of a black hole, so Mary and Dr. Reid departed on a dangerous mission to prove her theory right.

Mary promised her son Newton she’d return safe and sound. But Dr. Reid betrayed her, stealing the Branthium and sending her shuttle into the black hole’s orbit. Using her wits, Mary modified her robotic vacuum companion N.E.W.T. to escape. But time moves differently on the outskirts of a black hole, and she was 87 years too late.

Now Mary is determined to fund her research to find a way to go back in time and be with her son. She joins the Apex Games as Horizon, master of gravity, just in time for the next season to debut on Olympus - where her old life once was and where she had promised to return.

Horizon is Scottish. Horizon was cast off in the ergosphere of a black hole for at least 87 Olympus years, but for her it was only 246 days. Horizon authored an academic writing named "Utilization of Hyperdense Matter Extracted from Black Hole Ergosphere". A page of it can be partially seen on Wattson's desk. Horizon's black hole ability is similar to the Gravity Star from Titanfall 2. Horizon's drone NEWT is seemingly named after her son Newton. She sometimes talks to her drone as if it is her son. Horizon's voice actor, Elle Newlands, confirmed that Horizon has ADHD. Horizon's name could be attributed to the event horizon of a black hole, where nothing can escape the tug of the black hole.