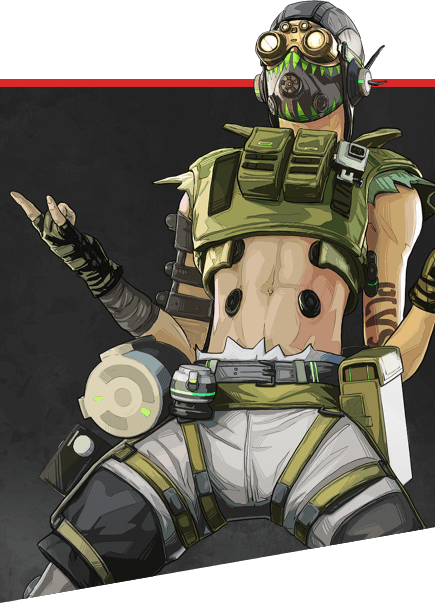 Octavio "Octane" Silva is an Offensive-Type legend in Apex Legends. This legend is the first post-launch release as a part of Wild Frontier. Players can unlock Octane with 12,000 Legend Tokens or 750 Apex Coins ($9.99 USD). The legend is not bound to the Wild Frontier battle pass.

One day, Octavio Silva was bored. In fact, he was bored most days. Heir to the preoccupied CEOs of Silva Pharmaceuticals and wanting for nothing in life, he entertained himself by performing death-defying stunts and posting holovids of them for his fans to gawk over. So, this day, he decided to set the course record for a nearby Gauntlet by launching himself across the finish line – using a grenade.

As he lay in triage hours later, the doctors informed him that the damage done to his legs meant his daredevil days were over. That didn’t sit well with Octavio, who turned to an old friend for help: Ajay Che, who he guilted into forging an order to replace his legs with bionic ones. Suddenly able to repair his limbs at a moment’s notice, Octavio decided petty online stunts weren’t enough: the ultimate adrenaline rush, the Apex Games, was calling.

Now, he’s going to become an Apex Champion doing the most incredible, death-defying moves anyone’s ever seen. Maybe in the arena, he won’t be so bored.

Octane's gauntlet lore was inspired by the 12-seconds World Record Gauntlet run in TITANFALL 2 achieved by Cash_mayo. The player threw a grenade under the feet to let the character gain momentum and speed, which is one of the favoured method to boost character's speed in TF2