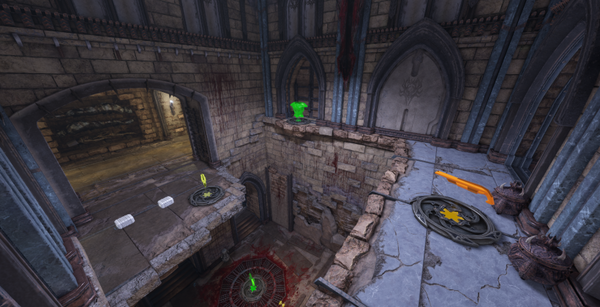 Blood Run is an arena in Quake Champions.

For each day without blood, the light grows lower in the sky. When midnight comes, the parclose gates shall open to release the dread heralds of Volkerh.

This map is a remake of the very popular Quake 3 Arena - Blood Run map (ztn3tourney1) made by ZTN.

This three-story central vault with walls weeping blood, is the most valued and iconic location on Blood Run. Most notable for a precarious jump from the upper level to the Heavy Armor alcove, the player risks falling to the lower level or becoming pinned down on the armor shelf. Players that do fall can find a slipgate hidden safely around a corner, allowing them the luxury of a second chance – but their opponent may not be so forgiving. Once on the armor alcove, a player often must dodge enemy rocket fire from the mid-level, or find them on the lower level waiting in hand with a Lightning Gun or Railgun to punish them as they attempt to escape. Both weapons readily available to them with the rail spawning at the base of the Vault and the lightning in waiting in the nearby Mega Health Hall.

This narrow passageway through the catacombs has the Mega Health sitting in the center, baiting you to pick it up. One end of the hall has the Lightning Gun and a jumppad that escapes towards the Parclose Gates, while the other leads you to the base of M’yriah.

Remember not only to visit this room to pick up a Rocket Launcher, but understand how important it will be for enemy to do the same. If you’ve taken down your opponent, you can often trap them off guard here as they gear up and try to secure that important weapon. The room also contains a Light Armor on the lower level, two staircases and a teleporter that all lead back to the great central Vault.

The final room is a small and tight space perfect for catching your enemy off guard – something you’ll hope you never fall victim too. Quickly gather your Super Nailgun and Light Armor and make your way to one of the three exits in the room; two take you quickly to the Vault, while the third drops you down into the Mega Health Hall. Outside of Duel matches, the Power-Up spawns here on the raised platform at the foot of the gates.