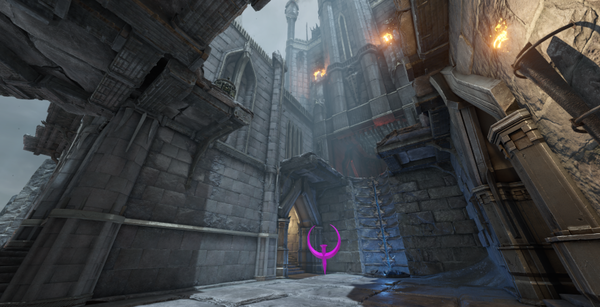 Corrupted Keep is an arena in Quake Champions.

Only two features stand above Oriab’s molten barrens: the colossal monument to the Greatsword of Nodens, and the searing citadel that faces its blade.

Beneath the colossal shantak bones lies a testament to Goroth. The Mega Health a symbol of the life we give in servitude to the The Sire of Embers. The slipgate at his feet leads one upward to the Lightning Gun. A broken wall section nearby often allows for a quick escape along with a few important Cooldown Hourglasses before fleeing towards Noden’s Outcropping.

A quick retreat away from the Mega Health, Noden’s Outcropping gives vista to the Greatsword monument. Here the Heavy Machinegun, two Small Healths and a Light Armor allow players to quickly gear up, but be wary of rocket attacks that could send you flying into the molten barrens below.

The lower level of the courtyard is surrounded by second story stone balconies that will leave any player below wishing for high ground. A jumppad at the end of the courtyard can provide that escape, with a Rocket Launcher as a reward for any that makes it safely to the top. When played in DM or TDM, the Power-Up spawns in the center of the courtyard.

This narrow tower surrounding the Heavy Armor provides only brief sanctity to players, as it can easily be assaulted from three sides. The slipgate can grant a quick escape toward the Inner Courtyard or you can try to flee on ground up the covered hall towards rockets or towards the Ember of Cthugha.

Beneath the eternally burning spark, a single fallen ember of Cthugha, lies a Light Armor and a staircase leading to a Super Nailgun. But the room is perhaps most often coveted for two Small Healths on the upper ledge that can quickly provide restore a wounded player.