Powerful and accurate, the AUG scoped assault rifle compensates for its long reload times with low spread and a high rate of fire.
Inventory description () 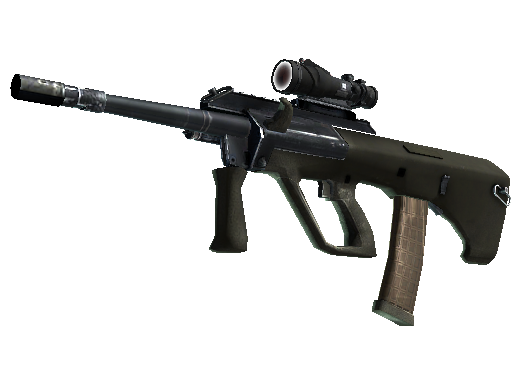 The AUG is an Austrian bullpup 5.56mm assault rifle, designed in the early 1970s by Steyr Mannlicher GmbH & Co KG (formerly Steyr-Daimler-Puch). The AUG (Armee-Universal-Gewehr—"universal army rifle") was adopted by the Austrian Army as the StG 77 (Sturmgewehr 77) in 1977, where it replaced the 7.62mm StG 58 automatic rifle (a license-built FN FAL). In production since 1978, it is the standard small arm of the Austrian Bundesheer and various national police units.

The AUG is a scoped alternative to the M4A4 and M4A1-S. Its scope, low recoil, and fast firing speed make the AUG deadly at all ranges. However, the AUG is more expensive than either M4, which, in competitive settings, is a major drawback for the CT side, which already spends about $1000 more to full-buy than the Ts. While the M4A1-S justifies its $3200 price tag by its substantial tactical advantages (silence and very low recoil), the AUG's only advantage over the much cheaper M4A4 is that it can scope. While this can make it slightly easier to land headshots against distant opponents, good crosshair positioning with either M4 allows players to achieve the same effect for less money, and without the visual shakiness, narrower view, and position-revealing click that comes from scoping in. In addition, the fact that the AUG has slower movement speed than the M4s makes it less effective when the CTs need to go on the attack. For these reasons, the AUG is seldom seen in high-level play, despite its many positive attributes. However, since it had been $50 more than the from the Hot and Cold patch to the Prisma Case update, this may encourage more use of the weapon.