High risk and high reward, the infamous AWP is recognizable by its signature report and one-shot, one-kill policy.
Inventory description () 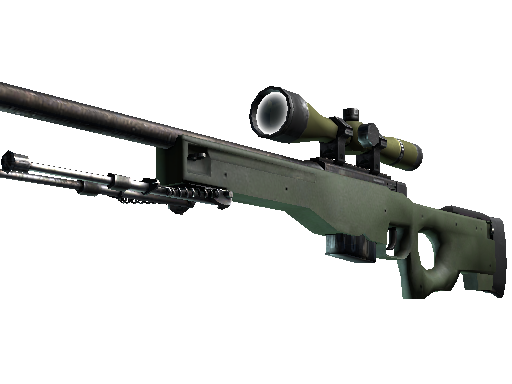 The Accuracy International Arctic Warfare rifle is a family of bolt-action sniper rifles designed and manufactured by the British company Accuracy International. It has proved popular as a civilian, police and military rifle since its introduction in the 1980s. The rifle was entered into a British competition in the early 1980s as a replacement for the Lee-Enfield derived sniper rifles then in use by the British Army (e.g. L42A1).

The AWP (Arctic Warfare Police) was a version intended for use by law enforcement as opposed to military. The AWP is normally chambered for 7.62 mm NATO/.308 Winchester or .243 Winchester ammunition though it could be chambered for other cartridges.

The AWP is the most powerful weapon in the CS series, having the ability to one shot kill an enemy regardless of armor. It's high-powered shot is offset by its very low rate of fire. Being a bolt action rifle, the player must work the bolt to load a new round after every shot, making it vital you hit the target with every shot fired. Players often choose to pair the AWP with a high damage or fast-firing secondary weapon, like a P250, Tec-9, or Dualies.

The AWP has undergone numerous changes in an attempt to make the weapon more balanced in CS:GO. Blur effects have been added to the scope, a high movement penalty has been introduced, and the kill award has been reduced to $100. Players must stand still for a little over a second in order to achieve perfect scoped accuracy. Quick-scopes and no-scopes are more inconsistent than in previous CS games and should not be relied on. Players who miss shots they feel like they might have made in previous CS games should take note that these are not, in fact, glitches, but are due to new changes designed to make the AWP a more stationary, tactical weapon.

Due to the high power and low fire rate of the awp, players should play unexpected angles and aim at center mass to ensure kills (as a shot in the leg will not kill,) taking cover or changing position after each shot. AWPers should be supported by rifling teammates ready to jump in or flash for the AWPer in case they miss a shot or are swarmed by the enemy, as a dead AWPer represents a lot of wasted money for a team. Being able to see more of the map, snipers are large sources of intel and must be good communicators.

AWPers should rely heavily on the first zoom level and use full magnification sparingly. The reason for this is that first zoom level is easier to switch to and allows you to see more of the map. Players wanting to cycle out of the first zoom level should always quick switch to their sidearm and back to the AWP, as it's faster than cycling through both magnification levels and leaves you more prepared to deal with unexpected threats at close range. For this reason, players should always have their sidearm set on quick-switch (rather than their knife) when entering combat.

An AWPer can be countered with smokes/flashes, another AWPer, or a straight rush with unpredictable movement if you're feeling particularly gutsy. The best course of action is to simply avoid areas with a known AWPer or force them to rotate.