As expensive as it is powerful, the Desert Eagle is an iconic pistol that is difficult to master but surprisingly accurate at long range.
Inventory description () 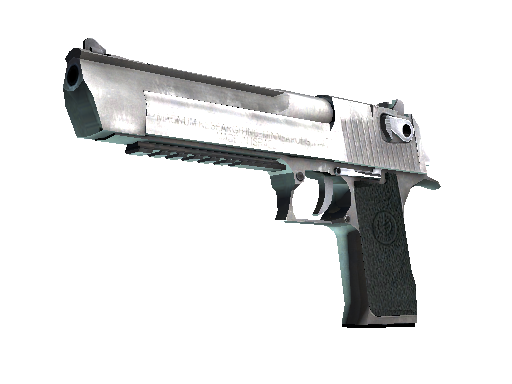 An iconic weapon in the CS series, the Desert Eagle is a powerful and expensive pistol that is often purchased by snipers who need a sidearm with a lot of firepower. Unlike the previous CS games, the Deagle's range and accuracy have been somewhat reduced in Global Offensive. The weapon now has a heavy movement penalty, but will still kill players wearing a helmet with a single headshot at long range.

Given its reduced range and significant movement penalty, players must carefully pick their shots while standing still. Aim for the head while firing slowly and deliberately while taking long, lateral strides between each shot to get the most out of this pistol.

Although many still stand by the Deagle, the cheaper P250, Five-SeveN, Tec-9, and CZ75-Auto are popular replacements to this pistol in CS:GO. While the Deagle is still the strongest long-range pistol due to its absurdly high damage and fairly accurate first shot, its slow draw speed makes it a risky choice as a sidearm, and a single missed shot at medium-range can be fatal. By comparison, the $300 P250 can one-shot headshot kill those without helmets at any range and do high damage with close-range headshots to those with head armors, all while having a higher fire rate, less recoil, and a larger clip. Nevertheless, in the right hands, the Deagle is a viable choice for late-game save rounds, where its 1-3 shot stopping power can swing the tempo of an entire match. Its $700 price tag makes it a poor choice in most pistol rounds, however, where lack of helmets means even default pistols can one-shot headshot and the faster-firing P250, Five-seven, and Tec-9 will drill through body armor very quickly.