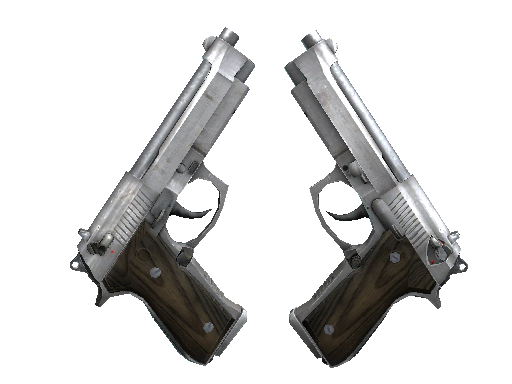 The Beretta M9, formally Pistol, Semiautomatic, 9mm, M9, is a 9×19mm Parabellum pistol of the United States military adopted in 1985. It is essentially a military specification Beretta 92F, later the 92FS. The M9 is a short recoil, semi-automatic, single-action/double-action pistol which uses a 15-round staggered box magazine with a reversible magazine release button that can be positioned for either right- or left-handed shooters.

The Dual Berettas are a highly effective weapon at close to medium ranges, and are a popular choice for first round on CT side. With better clip size than any other CT pistol, the Berettas are effective at both close range rapid fire, achieved by rapidly clicking, or a quick 2-3 shot burst into the enemy's head area, effectively killing both armored and unarmored opponents. This tactic should be used carefully and with lots of movement as a well placed AWPer may kill you before you even manage to begin shooting. A major drawback of the Berettas is their long reload and relative inaccuracy, making the weapon almost useless against snipers or in open spaces. Moreover, the usefulness of Berettas may dwindle after the first 2-3 rounds due to their comparatively low armor penetration. Cover and stealth are your best bets, and, paired with good gun play, make the Berettas a deadly choice of pistol.