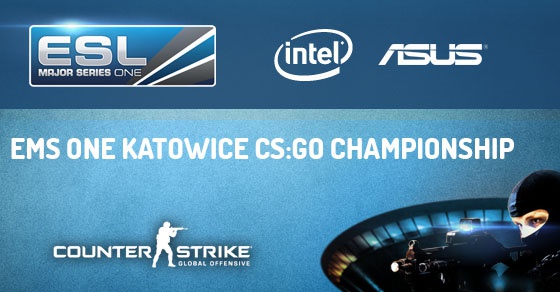 Having just concluded an amazing year of EMS One CS:GO in 2013, we are happy to announce that ESL is taking Counter-Strike: Global Offensive to the big stage and finishing its first 2014 EMS Season with a $250,000 tournament in the Spodek arena at the Intel Extreme Masters venue in Katowice.

The shared $500,000 prize pool for the IEM Season 8 Finals & the EMS One CS:GO Finals sets a new prize money record for a European eSports event and is sure to once again draw massive crowds to the 11,500 capacity stadium.

The EMS One CS:GO tournament, made possible by Asus, Intel, Valve and the CS:GO community, will feature a combination of 16 invited and qualified teams from around the globe, who will battle it out for a share of the massive community funded prize pool. Already invited are the eight quarter-finalists of the last community funded tournament, the 2013 DreamHack SteelSeries CS:GO Championship, which includes the 4 best performers of last year's EMS One CS:GO Season.[1]