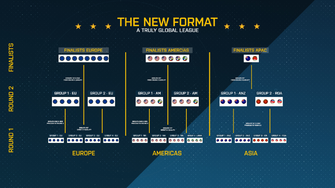 A graphical explanation of the new format

Note: Due to the format change for Season 11, all former Pro League and Relegation teams not invited to Season 11 have received invites to ESEA Premier S33.

Samuelsson into being the team's coach. [8]
3 September 16th - Fnatic sign

valde is benched on North and replaced by

cajunb on the starting lineup. [11]

1 June 14th - The Aristocracy brand and roster are acquired by Codewise Gaming. [21]

kwezz as a stand-in after the departure of

denis to a management position and the bench, respectively.