A cheap option for cash-strapped players, the FAMAS effectively fills the niche between more expensive rifles and the less-effective SMGs.
Inventory description () 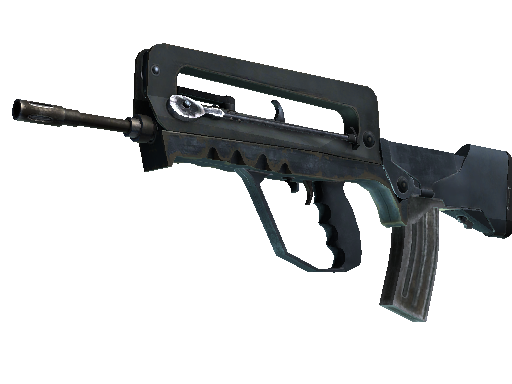 The FAMAS (French: Fusil d'Assaut de la Manufacture d'Armes de Saint-Étienne or "Assault rifle of the Saint-Étienne weapon factory") is a bullpup-styled assault rifle designed and manufactured in France by MAS located in Saint-Étienne, which is now a member of the French government-owned Nexter group. It is the service rifle of the French military. The FAMAS project began in 1967 under the direction of Paul Tellie and the first prototype was completed in 1971, with French military evaluation of the rifle beginning in 1972. After adoption, the FAMAS F1 replaced the aging MAS 49/56 rifle and MAT-49 submachine gun, and approximately 400,000 FAMAS F1 assault rifles were produced. The FAMAS first saw service in Chad during Operation Manta and again in desert operations in Kuwait during Operation Desert Storm and in other various peacekeeping missions. Officially, operational conditions proved the weapon to be reliable and trustworthy under combat conditions. The FAMAS is affectionately known as le Clairon ("the Bugle") because of its shape by French-speaking troops.

The FAMAS is a weapon that is deeply rooted in the CS franchise. It has two modes of fire; fully automatic and three round burst.

The FAMAS is the CT equivalent of the Galil AR: a cheaper, less powerful alternative to the standard M4 or AK-47. The FAMAS does have some advantages over its superior peers: on 3 round burst mode, the FAMAS has less recoil than the M4 during the initial 3 shots, and it has significantly more ammunition both in the clip and in reserve than the M4A1-S. For close and medium range encounters, however, it is generally more effective to master the spray pattern of the FAMAS and use full-auto mode, and here the weapon's drawbacks become clear. The FAMAS deals significantly less damage than either M4 and often requires 5-6 bodyshots to kill (as opposed to the 4-5 from an M4). Moreover, the FAMAS at long range deals less than 80 damage on a headshot, which often means FAMAS users must land more than one subsequent bodyshot to secure a kill and puts it, damage-wise, on par with or below the UMP-45 and Five-SeveN. This makes the FAMAS a risky choice against Ts with the one-shot headshot AK-47 and largely ineffective against an AWP. For these reasons, players most frequently buy the FAMAS after winning pistol round and in force-buy rounds, when they aren't able to make a full buy of M4, armor, and grenades.