The Glock 18 is a serviceable first-round pistol that works best against unarmored opponents and is capable of firing three-round bursts.
Inventory description () 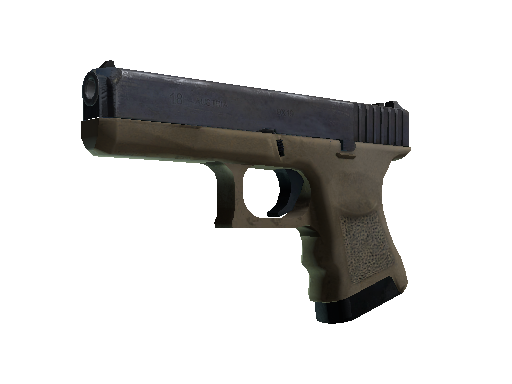 The Glock pistol, sometimes referred to by the manufacturer as Glock "Safe Action" Pistol, is a series of semi-automatic pistols designed and produced by Glock Ges.m.b.H., located in Deutsch-Wagram, Austria. The company's founder, engineer Gaston Glock, had no experience with firearm design or manufacture at the time their first pistol, the Glock 17, was being prototyped. Glock did, however, have extensive experience in advanced synthetic polymers, knowledge of which was instrumental in the company's design of the first successful line of pistols with a polymer frame. Glock introduced ferritic nitrocarburizing into the firearms industry as an anti-corrosion surface treatment for metal gun parts. Despite initial resistance from the market to accept a "plastic gun" due to durability and reliability concerns, Glock pistols have become the company's most profitable line of products, commanding 65% of the market share of handguns for United States law enforcement agencies as well as supplying numerous national armed forces and security agencies worldwide.

The Glock 18 was originally designed to fulfill a counter-terrorism role for the Austrian EKO Cobra special forces group. The Glock 18 is largely the same as the Glock 17, both in dimensions and internal components, with a couple of exceptions: The Glock 18 has a fire selector switch on the left side of slide, near the rear. The original Glock 18 also had a barrel that was approximately half an inch longer, with some slots on top to work as a compensator, to control recoil.

The Glock has had two firing modes throughout all CS titles; semi-auto and three round burst. It is starting pistol for the Terrorists.

The glock is a low damage, low recoil weapon that is best used when fired quickly at close range. The three round burst mode can be effective in close range situations when aiming at the head, but doing so affords less room for error as there is more delay between bursts than regular semi-auto fire. As the T-side starting weapon, the glock is suprisingly effective. It has decent accuracy and kills helmet-less opponents at close range with one shot. Once opponents have helmets, however, the glock becomes much weaker, as it can take 3 headshots to bring a full-hp opponent to 0 and a whopping 10 bodyshots to do the same. For this reason, Ts on eco rounds will usually pick up P250s or Tec-9s unless they have absolutely no money to spare.