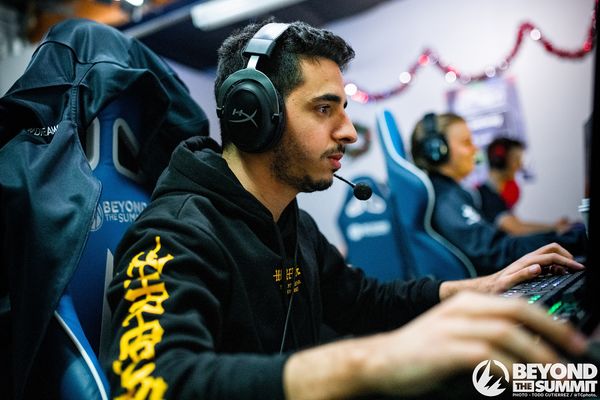 ISSAA's professional career began in began in early-2016 when Chosen5, a lineup consisting of Jordanian and Iraqi players, was created. While the lineup failed to gain traction internationally, ISSAA began to be recognized as a budding talent after qualifying to FPL while also guiding the team to numerous closed qualifiers including the first DreamHack Masters Malmö 2016 Closed Qualifier and the WESG 2016 Middle East and Africa finals.

After the end of his time with Team Spotnet, ISSAA briefly linked up with Gux & Friends, a lineup helmed up famous former Fnatic player Gux. During his briefly one-month tenure with the squad, the team failed to achieve any notable results however this was the start of ISSAA's relationship with woxic his future teammate on HellRaisers.

After only a month with Gux & Friends, ISSAA joined his first major organization, HellRaisers, alongside woxic. ISSAA's first big event with HellRaisers was the ESL Pro League S6 Finals, where the team made it to the playoffs after beating fnatic, Team Liquid, and Astralis before being felled by Misfits. Their next LAN event was Bets.net Masters in April, where ISSAA lifted his first large trophy with the team following a 2-1 win over North in the finals. At ISSAA's next international LAN, DreamHack Tours 2018, the team claimed a second place finish North returned to claim revenge in the finals. In 2018, ISSAA and HellRaisers qualified to the FACEIT London Major CIS minor where the team qualified in the Major while dropping only a single map to Team Spirit. In the FACEIT Major, HellRaisers reached their peak as a team and an organization after qualifying to the playoffs before being eliminated by Team Liquid. With this, ISSAA also notably became the first Middle Eastern player to attend a Major. After this incredible achievement, ISSAA would continue with HellRaisers for another year where the teams results began to stagnate as notable players began to leave the team, with their only achievement at this team being a fourth place finish at SuperNova Malta 2018. In December 2019, ISSAA exited HellRaisers after being acquired by OG to join a new international project alongside NBK-, Aleksib, valde, and mantuu.