A strong open-area LMG, the M249 is the perfect choice for players willing to trade a slow fire rate for increased accuracy and a high ammo capacity.
Inventory description () 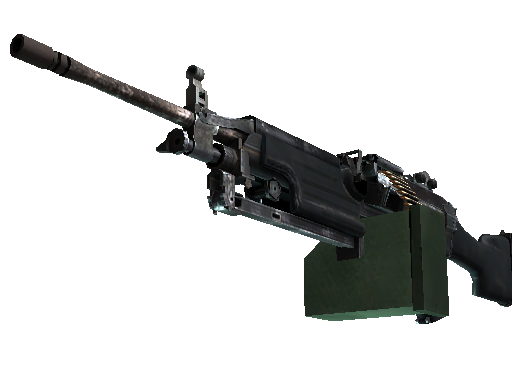 The M249 light machine gun (LMG), previously designated the M249 Squad Automatic Weapon (SAW), is an American version of the Belgian FN Minimi, a light machine gun manufactured by the Belgian company FN Herstal (FN). The M249 is manufactured in the United States and is widely used by the U.S. Armed Forces. The weapon was introduced in 1984 after being judged as the most effective out of a number of candidate weapons designed to address the lack of automatic firepower in small units. The M249 provides infantry squads with the heavy volume of fire of a machine gun combined with accuracy and portability approaching that of a rifle.

The M249 is gas operated and air-cooled. It has a quick-change barrel, allowing the gunner to rapidly replace an overheated or jammed barrel. A folding bipod is attached near the front of the gun, though an M192 LGM tripod is also available. It can be fed from both linked ammunition and STANAG magazines, like those used in the M16 and M4. This allows the SAW gunner to use rifleman's magazines as an emergency source of ammunition in the event that he runs out of linked rounds. However, this will often cause malfunctions as the magazine spring has difficulty feeding rounds quickly enough to match the SAW's high cyclic rate.

The M249, like the Negev, has a massive supply of bullets and shreds targets even while behind cover. However, while not as bad as the Negev's, the M249's recoil is extremely hard to control after the initial few shots and does not follow the easily-countered vertical pattern of the M4A4, M4A1-S, and AK-47. This means that players wielding the M249 will often end up shooting for longer before bringing an opponent than they would have if they'd just picked up a rifle. While the wall of bullets can cause less experienced players to panic, good spray control usually means the M4 or AK will come out on top, and at a fraction of the cost. Consequently, this weapon lacks a clear role and is seldom bought in competitive matches.