With a smaller magazine than its unmuffled counterpart, the silenced M4A1 provides quieter shots with less recoil and better accuracy.
Inventory description () 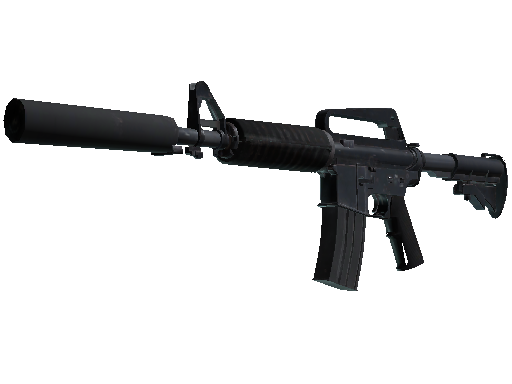 The M4A1-S is an optional replacement for the M4A4 in your inventory and will take up its slot. The M4A1-S has a slightly better accuracy and slightly lower recoil than its close relative M4A4 except when jumping (which you should never do while shooting anyway). Users should also keep an eye on their ammo management. The M4A1 has 5 less rounds than the M4A4 in each magazine, and only have 3 spare magazines upon purchase. Its damage, penetration, armor penetration, fire rate, and all other stats are identical to that of the M4A4. Unlike the M4A4, the M4A1-S is equipped with a suppressor that is attached upon purchase. This can be removed, although this is not recommended as this causes the weapon to be less accurate than the M4A4 (therefore making the weapon useless) and the suppressor allows users to fire this rifle without being spotted on the radar/mini map. The suppressor also hides muzzle flash and bullet tracers, making the M4A1-S the ideal ambush weapon. As with other rifles, the M4A1-S is most effective while standing still. Its low recoil makes learning to counter its spray pattern easier than for the M4A4 and AK-47.