More accurate but less damaging than its AK-47 counterpart, the M4A4 is the full-auto assault rifle of choice for CTs.
Inventory description () 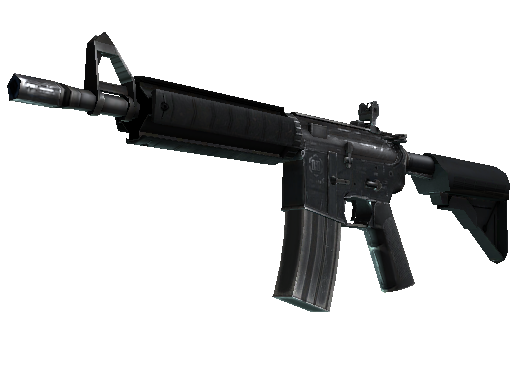 The M4 carbine is a family of firearms tracing its lineage back to earlier carbine versions of the M16 rifle, all based on the original AR-15 rifle designed by Eugene Stoner and made by ArmaLite. The M4 is a shorter and lighter variant of the M16A2 assault rifle, with 80% parts commonality. It is a gas-operated, magazine-fed, selective fire, shoulder-fired weapon with a telescoping stock. The M4A4 is a fictional name for a version of the M4A1 Carbine with a shortened upper receiver, making it more suitable for close quarters combat. Only Counter-Terrorists can buy this weapon, while Terrorists must resort to picking it up off the floor after firefights.

Unlike M4's in previous CS games this weapon does not have a silencer. Instead, it can be switched out for a silenced but lower ammunition capacity M4A1-S.

Although considerably weaker than the AK-47, the M4A4 has more manageable recoil. Where the AK can drop the enemy with one well-placed shot, the M4A4 puts more rounds on target with greater accuracy in a shorter amount of time. This almost makes up for the fact that the M4 requires two headshots (or one headshot and one body shot) to kill an opponent wearing a helmet.

As with other rifles in CS:GO, the M4A4 is so inaccurate while the player is moving that it becomes essentially unusable. Players are therefore well-advised to stand still while firing. The M4A4, like the M4A1-S and AK-47, also has a predictable spray pattern for its first 10 or so shots which players can counteract by adjusting their crosshair (see below). At longer ranges, players may prefer to fire in 1-2 round bursts while strafing to dodge incoming fire. While this approach is unnecessarily slow at medium to close range, at long range it can be quite effective as long as the player is careful to stop moving before firing. Players can stop faster by quickly tapping the reverse directional key after strafing.