Essentially a box that bullets come out of, the MAC-10 SMG boasts a high rate of fire, with poor spread accuracy and high recoil as trade-offs.
Inventory description () 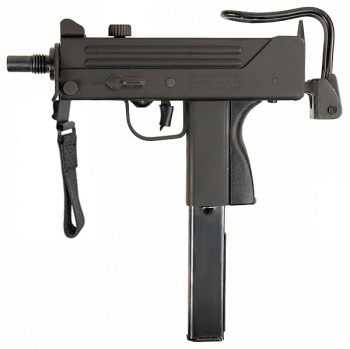 The MAC-10 (Military Armament Corporation Model 10, officially the M-10) is a highly compact, blowback operated machine pistol developed by Gordon B. Ingram in 1964. The term "MAC-10" is commonly used, but unofficial parlance. Military Armament Corporation never used the nomenclature MAC-10 on any of its catalogs or sales literature, but because "MAC-10" became so frequently used by Title II dealers, gun writers, and collectors, it is now used more frequently than "M10" to identify the gun.

Used much like an oversized Glock-18, the Mac-10 is an effective Eco-round weapon for those experienced with it and capable of controlling its recoil. The MAC-10 loses much of its effectiveness against multiple enemies or at long ranges. This is because it relies on rapid fire, close range, headshots to be effective. As one fires 3-5 shot bursts at the upper chest, wait for recoil to carry the last few shots into the enemy's head. This will kill an enemy with armor, so long as the majority of your shots hit. Otherwise, you may have to wait for your shooting to recover from the recoil of the last burst and repeat. Be wary: If you aim for the body, you are likely to waste all of your ammo, leaving you helpless against more than one or two enemies. With low armor penetration and damage, the MAC-10 will not have enough ammunition left for another kill, forcing you to reload. A spray can be effective against a single enemy, however, and should not be discounted entirely.