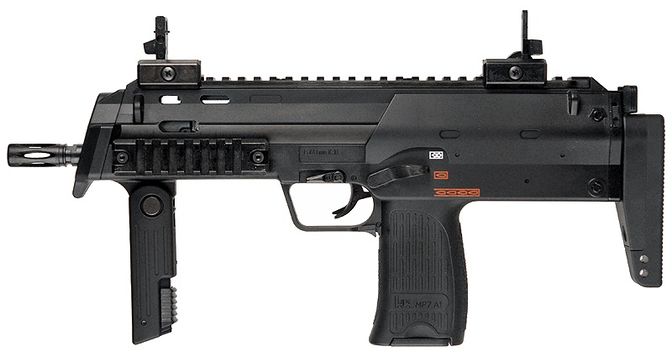 The MP7 is a German submachine gun manufactured by Heckler & Koch (H&K) and chambered for the HK 4.6×30mm cartridge. It was designed with the new cartridge to meet NATO requirements published in 1989, as these requirements call for a personal defense weapon (PDW) class firearm, with a greater ability to defeat body armor than current weapons limited to conventional pistol cartridges. The MP7 went into production in 2001. It is a direct rival to the FN P90, also developed in response to NATO's requirement. The weapon has been revised since its introduction and the current production version is the MP7A1.The proliferation of high-quality body armor has begun to make guns that fire pistol ammunition (such as Heckler & Koch's earlier MP5 submachine gun or USP pistol) ineffective. In response to this trend, Heckler & Koch designed the MP7 (along with the now cancelled UCP pistol, which uses the same ammunition) to penetrate body armor, but small enough to be used in place of either a pistol or a submachine gun.

The MP7 essentially operates like a scaled-down assault rifle, with the same action as Heckler & Koch's G36, a short stroke piston. The 4.6x30mm ammunition is virtually exclusive to the gun (save for the now cancelled Heckler & Koch UCP and a planned variant of the Brügger & Thomet MP9) and also offers low recoil. This ammunition is unique among submachine guns in that the bullet is made almost entirely of a hardened steel penetrator instead of softer copper or lead. The weapon allows a conventional 20-round, 30-round, or 40-round box magazine to be fit within the pistol grip (the 20-round magazine being comparable in size to a 15-round 9mm magazine, while the 40-round magazine compares to a 30-round 9 mm magazine). The weapon features an ambidextrous fire selector, bolt catch lever and magazine release. It has an extendable stock and a folding front grip; it can be fired either one-handed or two-handed. It is compact and light, due to the use of polymers in its construction.

Commonly purchased after a first round win, the MP7 provides 1-2 shot head shots against unarmored opponents with a high rate of fire and plenty of spare ammunition. The standard $600 kill award for SMG's also allows for a buy the next round providing the round is won, or the round after that if it is a loss. It is the second most expensive SMG, however, which may cause players to prefer the cheaper MP9, MAC-10 or PP-Bizon.