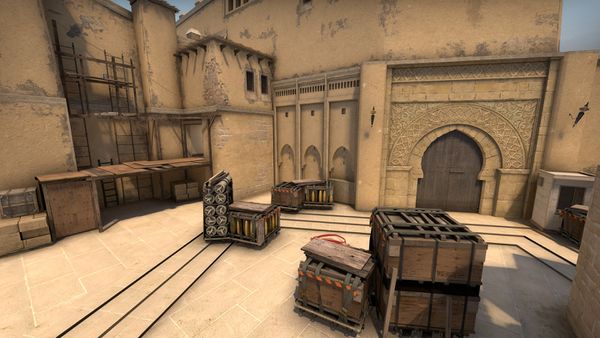 Valve and Hidden Path Entertainment had refined the map's visuals and implemented small gameplay tweaks. For instance, the original versions of Mirage had textures similar to Italy. Later on, it was changed into a Dust-like setting.

A fairly open bombsite, cover is spread around the plant site to provide cover for the bomb planter. With 3 entrances for Terrorists to enter (Palace, A ramp, Connector), coordinated executions with grenades, along with covering firepower through mid and window control, can lead to an easy take of the site and allow Terrorists to cut off rotations. Using molotovs to clear out hiding spots for CT players such as sandwich and balcony is also important.

AWPers often hold angles from behind ticket booth and triple box to fend off rushes, executions and any individual play from Terrorists, but sometimes they can change up and go for aggressive pick in connector or palace. The site itself also provides a lot of cover behind boxes, in sandwich, and around balcony for other CT players to stay passive with the option to play more proactive around connector and stairs. They can also flash their teammates to take a forward position in A ramp.

Mid is very open for a lack of cover and quite often players from both sides will have to engage in heavy gunfights and grenade usage to take control of this area.

Using a smoke to cover the approach to top mid can prevent being picked by AWPers. Smoking off window and sending players through underpass allows Terrorists to control mid and from there take control of both connector and catwalk. With mid control, T players can even boost their teammates into window for a potential flank into A through CT spawn or B through kitchen.

Counter Terrorists usually hold mid in crossfire from window, connector, catwalk, and ladder room. However, they can make aggressive plays in underpass or put pressure on top mid early in the rounds with smart grenade usage. Both options grant CT players chances of backstabbing the T-side unexpectedly if they want to go all the way through alley and T spawn.

Entering Bombsite B for Terrorists can be more difficult to enter due to the long hallway of the B apartments, however, good flashes and molotovs can force away CT players who are holding angles (e.g. from van) or in hiding (e.g. under default). Also, good smoke set-ups can block off vision from both kitchen and short B, thus isolate the site for a much easier take. Sometimes teams will take mid control and commit a B-split from short B and B apartments while leaving a player in ladder room to cut off rotations.

AWPing from van into B apartments is favorable since the narrow and long hallway allows AWPers to take a shot then safely fall back if needed. Jump-spottng from default is very common as well because CT players often see the Terrorists beforehand, thus they can quickly make adjustments to their hold. Also, there are a lot of hiding spots and covers around the site such as bench or boost boxes that can help the CT-side catch Terrorists off-guard if they don't clear those positions thoroughly. Crossfire from kitchen and catwalk provides additional firepower to slow down the attack from B apartments. 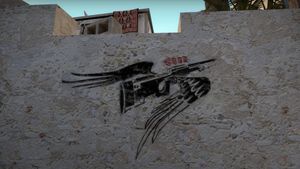