This article details the various mouse settings both in and out of Counter-Strike: Global Offensive that affect gameplay. 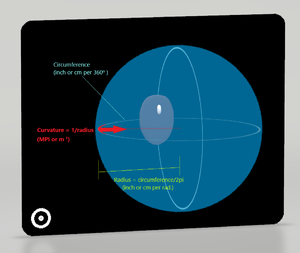 The most important variables in configuring your sensitivity are the in-game sensitivity value, CPI value of the mouse, and if raw input is not in effect, the operating systems pointer speed option.

The result of taking into account all relevant settings produces the player's physical Physical Sensitivity, giving an absolute representation of his overall sensitivity. Visualize a sphere of specific diameter or radius ("Turn Radius") that the player rolls on the mouse pad as the mouse is moved. The sphere represents all possible in-game orientations of the player, in Euler angles, and the the length of a full rotation is its Turn Circumference. Since sensitivity scales inversely with the size of the sphere, it is much more intuitive to measure the sphere's Curvature to compare between settings linearly. The curvature can be measured in units of deg/mm or in MPI.

Relevant formula for measurements of sensitivity are as follows:

The MPI value (Minute Per Inch) represents how many Minutes of Arc (1/60th of a degree, MOA) of rotation is applied in-game when moving the mouse by one inch. It is an alternative standard for the depricated "eDPI"measurement, retaining the advantage in ease of its calculation. Because one MOA (~0.0167 degree) is very close to Counter-Strike's default m_yaw of 0.022 degrees, the values are close to the naïve CPI-Sensitivity Product, so MPI can be considered as the unambiguous version of "eDPI".

The Turn Circumference, expressed in units of cm/rev, is a full in-game revolution's corresponding physical movement by the mouse. It is colloquially known as "cm per 360", erroneously omitting degree as the unit of rotation; since the misnomer has been widely adopted in FPS parlance, it is recommended that "cm/rev" be used as a replacement for the existing colloquialism.

Traditionally the CPI-Sensitivity Product (CSP, colloquially known as "eDPI") have been used. It is calculated by naïvely multiplying a user's in-game mouse sensitivity value by their mouse CPI. Provided that external factors are disregarded (acceleration) and/or accounted for (Windows mouse sensitivity, raw input...), these values are only comparable between players with the same m_yaw and not between different games. Therefore this measurement is deprecated in favor of more universal standards such as Turn Circumference or MPI.

The CPI value (counts per inch, often erroneously referred to as DPI -- dots per inch -- see here) of a mouse is the number of counts a mouse will send to the operating system when moved one inch. For example, the user's mouse uses 800 CPI, it will basically move 800 pixels on their screen for every inch they will move their mouse. CPI is directly proportional to the perception of how "fast" the in-game sensitivity is.

It should be stressed that a higher CPI value does not equal better performance or accuracy, it is just an arbitrary "unit" that the mouse delineates continuous movements into. In fact, most competitive players use some of the lowest CPI options available in modern mice, most commonly in the 400 to 800 range.

A low CPI value gives a more lenient response when tuning the in-game sensitivity, as the physical sensitivity value will not change by as much compared to high CPI. This allows one to use the slider for a rough estimate, whereas high CPI require obsessing over each decimal place to preserve the same physical sensitivity. 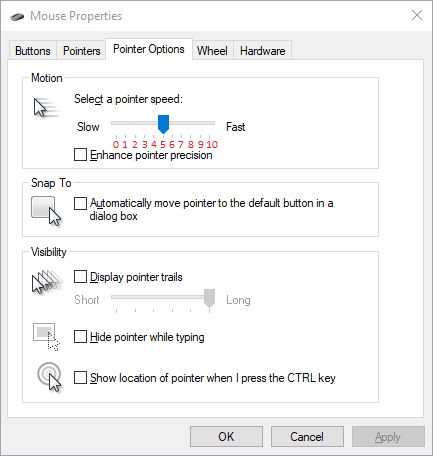 Pointer Speed is the Windows option that scales individual counts from the mouse to on-screen cursor movement, represented by the String value MouseSensitivity in the Windows Registry. Windows has 20 mouse sensitivity levels. At the value of 10 (middle notch in Control Panel), the multiplier is 1 (i.e. for every one mouse count your computer will move the pointer one pixel on your screen). Non-integer multipliers, contrary to popular belief, do not affect accuracy, as the rounded residuals are handled by an accumulator. However, a MouseSensitivity setting of greater than 10 will cause the desktop cursor to skip pixels and slightly reduce its precision.

For each MouseSensitivity value from 1 to 20, cursor movement is scaled as follows:

This setting has no effect on in-game camera movements if raw input is enabled.

Mouse acceleration increases the speed of the cursor's movement according to how quickly the user moves their mouse. While the feature may be useful for desktop usage, it is commonly disliked by gamers due to the potential inconsistency in movement that it can cause.

Because Counter-Strike's acceleration algorithm is calculated per frame, fluctuating framerates will cause extremely inconsistent acceleration scaling. This is why it is recommended that the in-game acceleration function is disabled, as it is a poorly implemented and detrimental feature.

This is what Windows calls mouse acceleration and it is enabled by default. This setting can be disregarded with the use of raw input.