We are hiring! Check out our business manager job posting and work in esports!
Follow us on Twitter @LiquipediaCS if you'd like to be kept up to date on all things Counter-Strike!
Liquipedia will soon drop support for Internet Explorer.

This page is part of the Natus Vincere article.

Natus Vincere was founded on 17 December 2009. After the collapse of Ukrainian team KerchNET, the former players of the team were supported by a well-known maecenas and organizer of e-sports tournaments, Murat "Arbalet" Tulemaganbetov. The new team got the name "Arbalet UA". It was composed of Danylo "Zeus" Teslenko and Ivan "Edward" Sukharev from Kharkiv, Sergey "starix" Ischuk from Kiev, Arsenij "ceh9" Trunozhenko from Lviv and Yegor "markeloff" Markelov from Dnipropetrovsk. 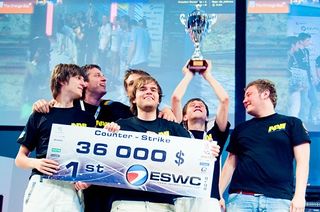 Na`Vi at the ESWC 2010 prize ceremony

After a poor performance at the Arbalet Cup CIS 2010 (4th place), markeloff, the best player on the team, decided to skip the next big tournament, ASUS Winter 2010, so they could prepare for the Arbalet Cup and Ukrainian qualifications for the ESWC. [1][2] In the middle of May 2010, Na`Vi took 2nd place in the prestigious Arbalet Cup Europe 2010 in Stockholm, losing to Fnatic in the finals and earning $10,000 in prize money. [3] Na`Vi finally gained victory at ESWC Ukraine. [4]

In the final part of the ESWC, the team received the highest seeding, along with SK Gaming, Fnatic and mTw.dk. [5] On July 4, 2010, Natus Vincere achieved the highest accolade in the history of Ukrainian e-Sports, winning the ESWC (which previously hadn't been done by any CIS team), defeating SK Gaming in the finals: 16:5 (Train) and 16:4 (Inferno). [6] During the tournament Na`Vi passed through the group stage thanks to fortune but outplayed Fnatic and mTw.dk in the playoffs. [7] 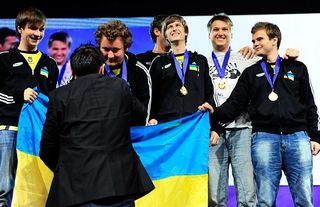 On August 15, Na`Vi won the Ukrainian qualifications for the World Cyber Games and got a paid voucher to the finals in Los Angeles from September 30 to October 3, 2010. [12]

The next tournament for Na`Vi was ASUS Summer 2010, to which the team received a direct invitation. This tournament became first in the ASUS Open series, which was held at Kyiv gaming centre "Kyiv CyberSport Arena". In the semi-finals, Na`Vi lost to Kazakh team k23 and as a result, took the 3rd place.

On October 4, 2010, Natus Vincere became the World Cyber Games world champions by defeating Danish team mTw.dk in the finals. [13] This victory made Na`Vi the first team in the world which had managed to hold the three most prestigious championship titles at once (IEM, ESWC, WCG). At the end of October 2010, ESL TV commentator Bakr "KinGSaicx" Fadl proclaimed that SK Gaming was going to invite the Ukrainian team to take place of its Swedish squad, but the manager of Natus Vincere declined this information. [14]

In early November 2010, Natus Vincere took part in WEM 2010, which annually gathers the best teams from all over the world in the Chinese city of Hangzhou. Among eight participants of the tournament, Na`Vi took 4th place as well as $7,500. [15]

From the 25th to the 27th of November 2010 in the Swedish city of Jönköping, the largest LAN party in the world took place – DreamHack Winter 2010. To go to this tournament, Natus Vincere had to skip a major Russian tournament, ASUS Autumn 2010, since it was coinciding with DreamHack's dates. After finishing the group stage Na`Vi consistently outplayed teams puta, fnatic, Frag eXecutors and then mTw.dk in the finals, winning the tournament. [16] During the four play-off matches the Ukrainians lost only one time to fnatic on the new map – Mirage. [17][18] starix received the tournament's MVP award.

In 2010, popular website HLTV.org had made rankings for the 20 best Counter-Strike players. markeloff was 1st place, starix 4th, Edward 5th and captain of Na'Vi had the 19th place, as well as "The best captain of the year". [22]

Shortly after on April 17 the team placed second at DreamHack Masters Malmö 2016. Na'Vi got second at the StarLadder i-League Invitational #1 after losing to Virtus.pro in the finals on May 22.

On September 2, Na'Vi became the champions of ESL One: New York 2016, defeating Virtus.pro in the finals.

On March 10, team coach Sergey "starix" Ischuk stepped down from his role in the team. He is replaced by team analyst Andrey "Andi" Prokhorov. [24]

On July 28, seized and GuardiaN stepped down from Natus Vincere. [25]

On August 9, Zeus and kane were brought in and seized returned. [26]

On November 6, Na'Vi brought in electronic in place of seized who stepped down from the roster. [27] [28]

During to June and July, Natus Vincere became the champions of StarSeries & i-League CS:GO Season 5, CS:GO Asia Championships 2018 and ESL One: Cologne 2018. On July 28, they placed 3rd-4th at ELEAGUE CS:GO Premier 2018 where they were beaten 0-2 by Team Liquid.

On September 23, Na'Vi placed second at FACEIT Major: London 2018, losing 0-2 to Astralis in the grand finals.

On March 2, Na'Vi reached to the semifinals at Intel Extreme Masters XIII - Katowice Major 2019, where they were beaten 1-2 by ENCE.