The Negev is a beast that can keep the enemy at bay with its pin-point supressive fire, provided you have the luxury of time to gain control over it.
Inventory description () 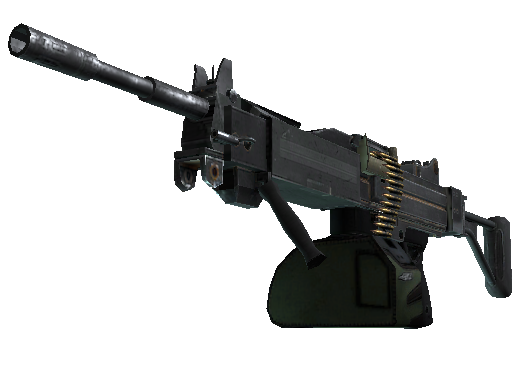 The Negev is an Israeli 5.56 mm light machine gun, developed by Israel Military Industries Ltd. (IMI) of Ramat HaSharon (now Israel Weapon Industries), as a replacement for the 5.56 mm Galil ARM light machine gun, whose barrel would overheat easily during sustained fire. Design work on this new indigenous firearm began in 1985, and it was officially adopted by the Israeli Defense Forces (IDF) in 1997.

The Negev is a gas-operated automatic firearm that uses propellant gases from the barrel to cycle a short-stroke gas piston operating system under the barrel and a rotary bolt locking mechanism. The bolt itself features 4 radial locking lugs that engage the barrel extension and its rotation is controlled by a pin on the bolt body, which rides inside a camming guide machined into the boltcarrier. The bolt contains a spring-powered casing extractor unit, while a lever ejector is housed inside the receiver (it is rotated by the recoiling bolt carrier).

Available to both Terrorists and Counter-Terrorists, the IMI Negev carries a 150-round magazine and has a much higher rate of fire compared to the M249. It suffered from poor accuracy and uncontrollable recoil prior to a March 24, 2018 update; its recoil after an initial short, inaccurate burst was significantly reduced, making it a great choice for commencing laser-accurate suppressive fire. In addition, the player's movement speed is 195 units per-second, meaning they suffer an enormous reduction in speed.

This weapon has an extremely high rate of fire and is able to cut down enemies in a split second. Fire the weapon in a suppressive manner. Although they are able to suppress and intimidate the enemy, machine guns come with a heavy movement penalty and very low recoil for only the negev. Consequently, LMG-wielding players often take longer to bring down their opponents than they would if they had just purchased a rifle.

The Negev is rarely purchased in competitive matches as it lacks mobility and long range capability, attributes usually found in rifles. Players occasionally buy this weapon for fun to discourage or humiliate the enemy when victory is near. Use flashbangs, range, and the element of spamming through smokes to counter players carrying machine guns.