A low-recoil firearm with a high rate of fire, the P250 is a relatively inexpensive choice against armored opponents.
Inventory description () 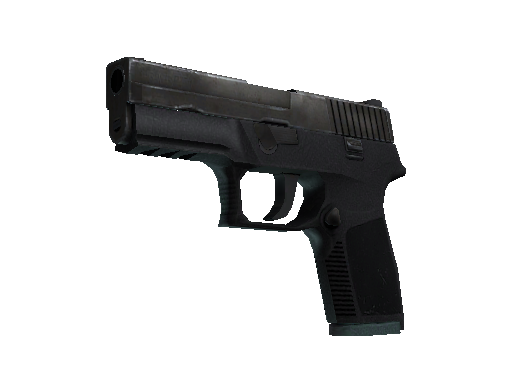 The SIG Sauer P250 is a semi-automatic pistol made by J.P. Sauer & Sohn, and SIG Sauer of Exeter, New Hampshire. The SIG Sauer P250 can be chambered in .357 SIG, .40 S&W, .45 ACP, and 9×19mm Parabellum. Like other SIG-Sauer pistols, the P250 pistol is a short recoil operated, locked breech pistol. It uses the typical SIG-Sauer cam-operated barrel, which locks into the ejection port on the slide.

A key feature of the pistol is its modular design. The main module of the P250 is an internal stainless steel frame fire control unit which consists of the integrated fire control group (trigger, hammer and all necessary linkage and springs), ambidextrous slide release (one on each side of the pistol), ejector and four slide rails. This steel receiver unit is used in every P250 grip module, top end, and chambering combination and is inserted into the grip frame module and held in place by the axis pin of the disassembly lever. The firearm's serial number is on the fire control unit instead of the grip module. The fire control unit allows the operator to interchange differently-sized slide assembly or top end modules and polymer grip frame modules and trigger shoes and (limited) chambering conversions to adapt the gun to the individual user and address different needs.

Due to its high rate of fire, low price, low recoil, large magazine and relatively high base damage, this weapon is a common replacement for the Desert Eagle in CS:GO. The P250 used to be capable of dropping targets with a helmet in a single headshot at close range, but this was patched in September of 2017. After its rework, the P250 is an especially effective choice in pistol rounds, as it can one-hit headshot unarmored enemies at a longer range than the USP-S. Also, its low price allows for the purchase of a grenade or defuse kit. That said, it is significantly less accurate than the default pistols and lacks reserve ammo, which often makes it better suited to eco rounds and to use as a luxury sidearm.

This weapon can be fired rapidly to great effect at close ranges, but at longer ranges the spread can become problematic.