The SCAR-20 is a semi-automatic sniper rifle that trades a high rate of fire and powerful long-distance damage for sluggish movement speed and big price tag.
Inventory description () 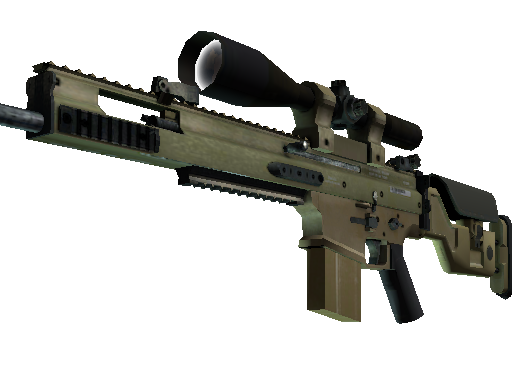 The Special Operations Forces Combat Assault Rifle (SCAR) is a modular rifle made by FN Herstal (FNH) for the United States Special Operations Command (SOCOM) to satisfy the requirements of the SCAR competition. This family of rifles consist of two main types. The SCAR-L, for "light", is chambered in the 5.56×45mm NATO cartridge and the SCAR-H, for "heavy", fires 7.62×51mm NATO. Both are available in Long Barrel and Close Quarters Combat variants. The SCAR is manufactured in two main versions; Light (SCAR-L, Mk 16 Mod 0) and Heavy (SCAR-H, Mk 17 Mod 0). The L version fires 5.56×45mm NATO using improved STANAG (M16) magazines. The H fires the more powerful 7.62×51mm NATO from a newly designed 20-round magazine. The FN SCAR systems completed low rate initial production testing in June 2007. After some delays, the first rifles began being issued to operational units in April 2009, and a battalion of the US 75th Ranger Regiment was the first large unit deployed into combat with 600 of the rifles in 2009. The US Special Operations Command has currently cancelled their purchase of the Mk 16 SCAR-L and are planning to remove the rifle from their inventory by 2013. However, they plan to purchase 5.56 mm conversion kits for the Mk 17, supplanting the loss of the Mk 16. The SCAR is now one of the competing weapons in the Individual Carbine competition which aims to find a replacement for the M4 Carbine.

The Mk 20 Sniper Support Rifle is based on the 7.62mm Mk 17 rifle. It includes a longer receiver, a beefed up barrel extension and barrel profile to reduce whip and improve accuracy, and an enhanced modular trigger that can be configured for single-stage or two-stage operation together with a non folding precision stock.

The SCAR-20 compares unfavorably to the AWP in two very important respects: it is more expensive and it deals half the damage. As an aggressive weapon, the SCAR-20 simply lacks the usability of its cheaper alternatives, with a dismally slow movement speed and a debilitating lack of crosshair while outside of scope. AWPs, on the other hand, can be used aggressively by experienced players to get fast entry frags at a variety of ranges and angles. This gives the AWP a versatility that the SCAR-20 simply does not have. However, there are certain locations in which the SCAR-20 can be a very effective defensive option. Examples of this are banana on Inferno, the B bombsite on Train, and upper B tunnels on Dust II. Each of these locations are essentially long hallways where advancing players have limited mobility and prefiring options, forcing them to back off or commit to a very unfavorable fight once the SCAR-20 makes itself known. Combined with a Smoke Grenade, the SCAR-20 can lock down these angles more effectively than an AWP, and its generous magazine capacity and fire rate mean that it can shoot blind if a Flashbang goes off with considerable success. The only way for an opposing team to reliably counter the SCAR-20 in these situations is to scout it out and set up a duel between it and a skilled AWPer, which the AWPer should usually win.