The terrorist-exclusive SG553 is a premium scoped alternative to the AK47 for effective long-range engagement.
Inventory description () 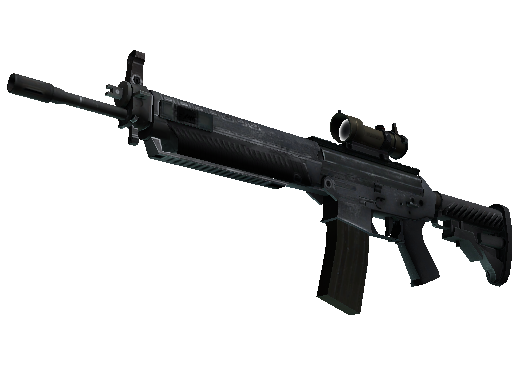 The SG 550 is an assault rifle manufactured by Swiss Arms AG (formerly Schweizerische Industrie Gesellschaft) of Neuhausen, Switzerland (SG is an abbreviation for Sturmgewehr, or "assault rifle"). The rifle is based on the earlier 5.56mm SG 540 and is also known as the Fass 90 (Fusil d'assaut 90 / Fucile d'assalto 90) in French / Italian or Stgw 90 in German (Sturmgewehr 90). n 1978, the Swiss Army formulated requirements for a successor to the Stgw 57 battle rifle (known commercially as the SG 510) using the 7.5×55mm Schmidt Rubin cartridge. Emphasis was placed on modularity; the weapon family was to include several variants of the base design, including a compact carbine that would be issued to rear-echelon and support troops, commanding staff, vehicle crews, special operations personnel and paratroopers. Another aim was to reduce the overall weight of the rifle while retaining comparable or improved accuracy out to 300 m. The solicitation was narrowed down to two designs: the W+F C42 (developed by the state-owned Waffenfabrik Bern, using both 6.45×48mm and 5.6×45mm cartridges) and the SG 541 (developed by SIG). In 1981, the experimental 6.45mm GP 80 cartridge was rejected in favor of the more conventional 5.6×45mm GP 90 round (with a 4.1 g, tombac-jacketed, lead core projectile) that is the Swiss equivalent to NATO's standard 5.56×45mm cartridge.

A higher accuracy rifle than the AK-47, the SG has a scope and ignores damage reduction from armor entirely but is the slowest firing assault rifle in the game. The recoil pattern of the AK-47 is similar to the M4A4, while the SG's diagonal recoil is unusual among CS:GO rifles. This makes mastering the SG a chore which, due to the presence of the AK, is hard to justify. And finally, the SG slows the player more than the AK, which makes it strictly worse than the AK for getting entry frags in most situations. However, the fire rate is significantly lower than the AK-47 600rpm because the SG 553 shoots at 545rpm. Oddly enough, this can make the SG better on the defending CT side of bomb plant maps, giving CT players who steal a T's SG more of an advantage than the T who bought it usually had in the first place.