A low-accuracy semi-automatic, the Tec-9 offers excellent penetration damage and a high magazine capacity, though its recoil can be unforgiving.
Inventory description () 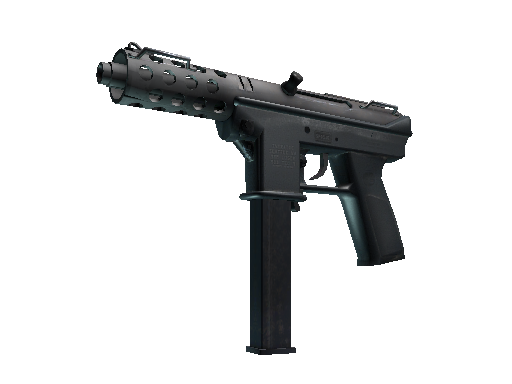 The Intratec TEC-DC9 (TEC-9) is a blowback-operated semi-automatic handgun, chambered in 9×19mm and was produced from 1985 to 1990. Designed by Intratec, an American offshoot of Interdynamic AB, the TEC-9 is made of inexpensive molded polymers and stamped steel parts. Swedish company Interdynamic AB of Stockholm designed the Interdynamic MP-9 9mm submachine gun. Intended as a cheap sub-machine gun based on the Carl Gustav M/45 for military applications, Interdynamic did not find a government buyer, so it was brought to US market as open-bolt semi-automatic KG-9 pistol, which was bought in large numbers by criminals and often converted to full-auto. Because of this, ATF forced Interdynamic to redesign it into closed-bolt system, which was harder to convert to full-auto.

The TEC-9 is a versatile but short ranged pistol. Its 18 round clip, high armor penetration, and rapid fire make it ideal for close combat. However, the TEC-9 has high accuracy and, in recent patches, reduced damage at long range. This means that to use it effectively, it should be tapped at medium to long range, or as a luxury sidearm when there is cash to spare. The high recoil can be managed for mid-range encounters, but it is more luck than skill that will carry the day in that case. At close to mid range, aim for the head, then for a finishing body shot. At long range, aim and slowly tap at the head and hope for the best. The TEC-9 is a one-shot kill on a close range headshot against helmet and non-helmet wearing enemies.