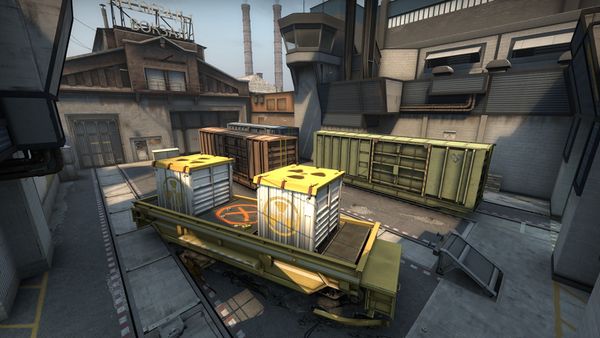 Valve made major improvements to Train as the textures were changed once more. The nuclear payloads were replaced with radioactive barrels and the position of the bomb target in Bombsite B was moved out of the enclosed loading docks to the middle of the area. Furthermore, there are two roofs in that bombsite which allows both teams to appoint a sniper for additional cover. Finally, the train cars no longer allowed players to move underneath them. The official factions in this map is SEAL Team 6 and the Balkans.

Counter-Terrorists: Prevent Terrorists from bombing the nuclear payloads on two trains. Team members must defuse any bombs that threaten the payloads. Terrorists: The Terrorist carrying the C4 must destroy one of the payloads.

Other Notes: There are 2 payloads on the trains in the mission.