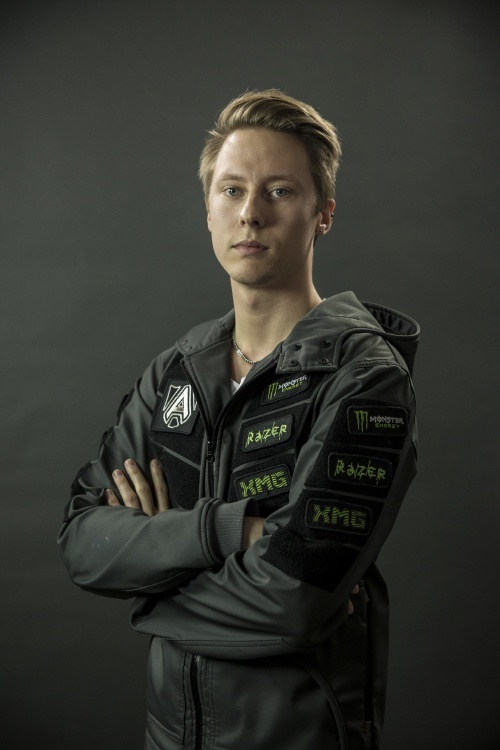 Joakim "Akke" Akterhall (born May 26, 1988) is an inactive Swedish Dota 2 player who last played for Crescendo.

His player name is pronounced "[ack-eh]".

He was part of the Alliance squad that became champions of The International 2013.

Aside from being involved in the competitive DotA scene since 2006, a testament to his long history in gaming, Akke has also won the Nintendo Swedish Championships three times, in 2004, 2006 and 2012.[1]

Akke was introduced to DotA in 2005 by his high school classmate Jonathan "Loda" Berg.[2] They played inhouses and 2v2's together, and soon got into the competitive scene which by then was very small. Their first serious team, in 2006, was Team Team (T_T), which consisted of the two together with three more Swedes, Bogdan, Renji and Kwom.[2] They won an ESL qualifier and soon thereafter Maelk approached the two friends to create a new team, Jukes on You (JoY), together with MaNia and Paccie. JoY won a tournament arranged by the well known organization Meet Your Makers called MYM Prime Defending #3 in October 2006, and as a reward they received sponsorship from MYM. They won DreamHack Winter 2006 for a 5000 SEK prize pool.[3]

MYM had some roster changes in late 2006, and as a result, Akke and Loda reformed Team Team. They were beaten by MYM in the finals of DreamHack Summer 2007, but shortly thereafter they were picked up by SK Gaming.[4] The lineup at this time was all-Swedish and consisted of Akke, Loda, Bogdan, Renji, Kwom, Drayich and toMpa.[5] The team,captained by Loda, became very famous and dominated the professional scene together with their biggest rivals, the all-Danish MYM, captained by Maelk. During the summer of 2008 SK were at their prime, winning ESWC in Paris as well as DreamHack Summer 2008.

Akke started studying at university in autumn 2008, and tried to combine it with playing professionally.[6] However, he had problems getting the time to practice enough and hence decided to leave SK and the Dota scene.[6]

Akke made his way back into competitive gaming with the release of Heroes of Newerth. Him and Loda joined a team called KD Gaming in late August 2010.[7] They both moved over to Online Kingdom and won the HoN Super Series in September 2011.[8] Akke received a 2011 GosuGamers HoN Award in the Best Support Player category, but shortly after this he decided to move on to Dota 2.[9]

Akke first entered the Dota 2 scene playing for the Swedish team eXperience Gaming with his long-time teammate and friend Loda.[10] Their team, consisting of those two, Pajkatt, Mirakel and Pinoy would soon get picked up by CLG. He then competed with CLG (with some roster changes in between, most notably Loda leaving for Zenith) at The International 2012, making the 5th place in their group and eventually dropping out of the tournament to Orange. After a period of relative inactivity after the biggest tournament of the year, he left the team to join No Tidehunter with Loda.[11] The team, consisting of Loda, Akke, s4, AdmiralBulldog and EGM, would proceed to dominate the western scene. After being picked up by Alliance they went to China to compete in, and win, the G-1 Champions League Season 5.

A few months, and multiple tournament wins later, they attended The International 2013, coming in as one of the favorites to win the entire tournament. They only lost three games during the entire tournament and won a very dramatic grand final against Na'Vi, to earn them around 1.4 million dollars as well as the right to title themselves "best Dota 2 team in the world".

After winning WCA 2015 and Star Ladder i-League StarSeries Season 1 over the winter period of 2015-16, Alliance saw a drop in form and finished 9-12th place at The International 2016. During the post TI-shuffle, on the 28 August 2016, it was announced that Akke would leave Alliance after more than three years with the squad since formation.[12]