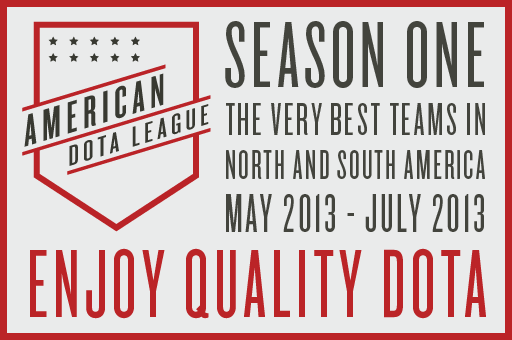 American Dota League features the very best teams in North and South America going head to head online for a $10,000 prize pool. The League will commence on May 28th, with each team going up against other teams twice in regular season. The top six teams will advance into the playoffs, with the top two directly seeded into the Semi Finals. Playoff games will be best of three, with the Grand Final a best of five affair. Casted in English by Aaron "Ayesee" Chambers, Travis "Maut" Bueno, and John "NYJohn" Hogan and in Portuguese by ArenaGamingTV.

This tournament was a unique pioneering of American eSports as the tournament host, Sean "SeanyC" Conlin, provided the entire tournament prize pool out of his own pocket. This was an entirely privately funded endeavor in an effort to promote the growth of eSports without major corporate sponsors, as well as include South American teams in a large tournament.

Click [show] on the right to view the Schedule
'League Play

*The original Denial eSports squad did not finish the tournament and all of their results do not count towards the final standings.