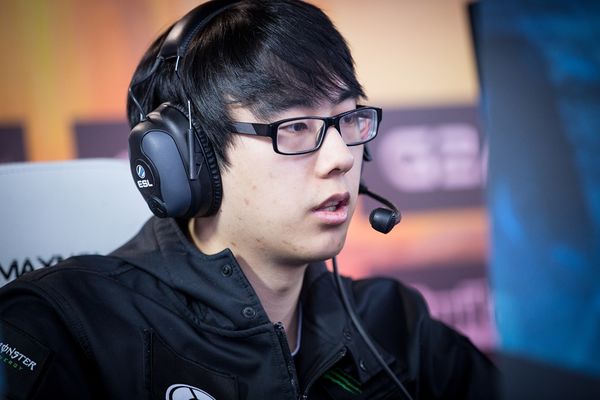 Aui_2000 encountered DotA for the first time as a nine year old playing casually. His competitive spark started in University of British Columbia's Starcraft club, where he competed competitively under the name ValiditySAGA. His Dota 2 interest jumped at The International's $1.6 million prize pool. He maintained two jobs simultaneously as a preschool janitor and stocker in a supermarket whilst studying sociology at his university. Though his parents were initially skeptical, they gradually warmed up to his career path.[1]

Kurtis began his DotA 2 career in 2012 playing the hard carry role for the up and coming North American team PotM Bottom. Aui_2000 made a name for himself with innovative item builds, such as Maelstrom on Lone Druid.[2] In August of 2012 Kurtis and his team won the Prodota2 Pro League with a 3-1 victory over Counter Logic Gaming.

PotM Bottom's success did not go unnoticed and on September 22, 2012 the team was acquired by Team Dignitas.[3] Behind solid play from everyone on the new roster Dignitas established themselves as one of the best teams in the world, placing highly in multiple online and offline tournaments. Most notably they placed 3rd/4th at DreamHack Summer 2013 beating teams such as Na'Vi along the way. Aui_2000 and Team Dignitas' success was rewarded with an invite to The International 2013, which would mark Kurtis' first appearance at an International. Dignitas had a strong early showing at TI3, boasting an 8-6 record after the group stages leaving them tied for fourth place with LGD Gaming. After losing their tiebreaker with LGD, Dignitas was placed in the losers bracket where they won their first match against RattleSnake. Their next match was a decisive loss to Orange Esports, resulting in a 9th-12th placement for the team.

After TI3 Team Dignitas disbanded and Aui_2000 decided to switch to a support role in order to join RSnake.int,[4] later re-branded to Speed Gaming.[5] Kurtis began to thrive in his new role as a support player as his strong mechanical skills allowed for him to play a multitude of heroes, most notably the farming four position Visage. He also began to popularize the use of the Rod of Atos, which is one of the least popular items in competitive dota, so much so that the item is often referred to as the Rod of AUI. The team immediately established themselves as a tier 1 with a 2-1 win over Team DK at MLG Championship Columbus.

On February 9, 2014, Aui_2000 and his teammates left Speed Gaming and joined Cloud9[6]. Leading up to The International Cloud 9 was one of the most consistent teams with five second place finishes in the span of four months. Most notably the team came in second place at the ASUS ROG DreamLeague Season 1, falling to Alliance 3-2. At The International 4 Kurtis and his team continued their success by finishing the group stage in sixth place with an 8-7 record. After beating Na'Vi 2-1 in the main event, they would be faced against Vici Gaming in round 2 of the lower bracket. The series went to a game 3, where a controversial level one roshan attempt failed and eventually lead to the elimination of Cloud 9 from the tournament.[7] The team finished in 5th/6th place, Kurtis' highest placement at TI so far. The remainder of 2015 proved to be equally successful for Cloud 9 with four second place finishes in premier tournaments, their last being a 3-1 loss to Vici Gaming at The Summit 2. Following The Summit 2 Aui_2000 and his fellow support player pieliedie were removed from the active roster of Cloud9 by team captain EternalEnVy due to the teams inability to clinch a tournament finals.

Unlike pieliedie, Aui did not choose to remain with the Cloud9 organization, despite the offer and was quickly picked up by Evil Geniuses in January 2015, replacing zai who also played a greedy position four support. Days before being picked up, EG had lost two of their key members zai and Arteezy who suddenly decided to switch to Team Secret. EG was put in an unfavorable position of having to replace two members a month before the largest non-Valve tournament, the Dota 2 Asia Championships. On EG, Aui would reunite with UNiVeRsE, with whom he'd played on Team Dignitas.

Kurtis had an immediate impact on Evil Geniuses' success, as the team finished the group stage at DAC 2015 with an 11-4 record. EG stormed through the bracket beating Na'Vi and Big God, with great play from Aui_2000 on his signature heroes, but were soundly defeated 2-0 by VG in the upper bracket finals. EG recovered with a 2-0 victory over Team Secret in the lower bracket finals, and a 3-0 victory over VG in the finals. The team took home $1,284,158 USD and established themselves as the best team for the beginning of 2015. With his win at DAC 2015 Kurtis broke his six game losing streak in the finals of offline tournaments.

On May 6, 2015, Aui_2000 and the rest of Evil Geniuses were invited directly to The International 2015. Leading up to TI5 Evil Geniuses placed 2nd in three premier offline tournaments: joinDOTA MLG Pro League Season 1, The Summit 3, and ESL One Frankfurt 2015 (the latter two were lost to Team Secret). This prompted the Dota 2 community to declare that Kurtis was a cursed player, as both C9 and EG failed to win a premier offline tournament after their first championship. Kurtis was looking to put an end to this curse at The International 2015.

During a crucial series in the group stage Aui_2000 demonstrated his refined playstyle on Techies, which lead to Evil Geniuses securing a 2-0 victory over CDEC Gaming as well as first place in Group B. These teams would meet again in the upper bracket finals, where EG were decisively beat 2-0. On the final day Kurtis' performance would play a large role in the teams success, as his signature heroes of the tournament Naga Siren and Techies were the first two heroes banned against EG in all of their matches, giving the team a strong drafting advantage. EG first squared off against LGD Gaming in the lower bracket finals and made quick work of them with a 2-0 win. Aui_2000 and his team would not squander their chance at revenge against CDEC Gaming when they met in the grand finals. EG prevailed with a 3-1 victory and were crowned The International champions, taking home the Aegis of Champions and $6,634,660.68 in the process.

However Aui_2000 would not get to enjoy his victory for long, as only a week after TI5 he was kicked for from Evil Geniuses for returning EG player Arteezy.[8] Due to much outrage from the community ppd, the captain of EG, made a post to his blog addressing why the decision to kick Aui_2000 was made[9].

Digital Chaos and Return to EG[edit]

On August 25, 2015, Aui was invited to join the newly founded team Digital Chaos as the position 4 support and had a key role in building its roster. He played alongside notable North American talent for a seven month span, playing in numerous qualifiers for ESL One New York 2015, StarLadder Star Season 13s, and Valve's own Frankfurt Major and Shanghai Major. After successfully qualifying for the Summit 4, Aui played his first LAN event at Los Angeles with Digital Chaos but disappointingly only placed 7-8th place in the tournament despite a well fought match-up against Evil Geniuses in the quarterfinals. With further qualifiers over the months, he and his team mates won the BTS Americas #3, earning himself his first win under Digital Chaos.

However, two months later another shocking roster shuffle between Evil Geniuses and Team Secret saw Aui move to EG once again, this time alongside fellow teammate BuLba[10]. This time, Aui would replace Arteezy as carry, a role he had returned to playing in the previous weeks. The shuffle proved unsuccessful for both EG and Team Secret, as both teams finished bottom four in the following Manila Major. This prompted EG to once again switch their roster, this time zai, who would make his return to competitive Dota after finishing high school, replacing Aui. When Secret registered their full roster for The International 2016's Open Qualifiers at Europe, Aui (along with BuLba) was listed among the members of the roster. It was later confirmed that Aui had joined Team Secret as a coach. After successfully clearing the European Open Qualifiers and finishing first in the European Regional Qualifiers, Team Secret finished with a disappointing last place at The International 2016, losing in the first round of the lower bracket to LGD Gaming.

In the wake of The International 2016, Aui would follow Team Secret's former carry/mid EternalEnvy, with whom he'd previously played on Cloud9, to found a new team, named Team NP. Joining them would be talented North American players MSS, SVG, and 1437. Notably, 1437 had played together with Kurtis on Digital Chaos and SVG had coached Evil Geniuses during their storied run at The International 2015. Aui would once again take up the role of carry, with EternalEnvy playing in mid.

The team quickly established themselves as a force in North American Dota, winning the qualifiers for The Boston Major, ESL One Genting and The Summit 6. Their first LAN attendance, would be the Northern Arena BEAT Invitational in November 2016, where they were invited to replace Digital Chaos after narrowly failing to qualify for the event. After losing against the current TI Champions Wings Gaming in their second game, NP made a fantastic lower bracket run, eliminating giants Alliance, Evil Geniuses, and EHOME. In the grand finals, NP would once again face and lose to Wings Gaming, finishing in a respectable second place. Their next LAN event would be the Valve-sponsored Boston Major, where they finished 5-8th, losing in the second round of the main event to rivals and TI finalists Digital Chaos. The new year would see Aui and Team NP compete at ESL One Genting in Malaysia, where they finished 5-6th after losing to Virtus.pro in the group stage.

Their strong results continued through to the new year, however new challengers showed up on the North American Dota 2 scene, most notably Team Onyx. After failing to qualify for the Kiev Major and a disappointing last place finish at the Dota 2 Asia Championships (DAC), SVG and 1437 were kicked from the team, to be replaced by pieliedie, from Team Secret, and FATA- from B)ears. Additionally, Aui would switch back to playing roaming support, with Envy taking over as carry. With these new additions, Aui and Team NP would reform 4/5 of the old Cloud9 roster from The International 2015. In fact, the last member of their former squad, bOne7 would soon join them as coach. After beating out their rivals Digital Chaos (former Team Onyx) and Thunderbirds (former DC) for the first spot at Qualifiers for TI7, the team was picked up by Cloud9, thus closing the cycle. However the team was unable to move past the first round of the lower bracket, finishing 13-16th at the main event, and disbanded following the tournament.

After a period of inactivity following TI7, Aui joined ritsu, bryle, MoonMeander and kitrak to form Animal Planet in early 2018. The team found immediate success as they qualified for the GESC: Indonesia Dota2 Minor and finished just shy of qualifying for the StarLadder i-League Invitational Season 4 and ESL One Katowice 2018. The team was signed by Iceberg Esports on January 30th, 2018.