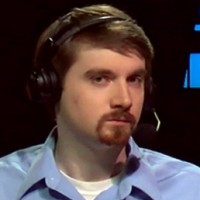 David "Blaze" Dillon is a Dota 2 caster for Beyond The Summit.

Blaze was introduced to Dota through his dad's office when he took haphazard trips alongside with his sister to the room, playing Warcraft II. With the sequel, Warcraft III: Reign Of Chaos released, he later became interested with the story-line behind it and ended up landing on Battle-Net playing a wide variety of custom games such as WinterMaul Wars and ladder games against other players. He later stumbled upon DotA and after installing it, he began inviting his friends over and played 3v3 Dota as little mini LAN parties at his house and that called it a "blast". As David went to college he tried the Heroes of Newerth and League of Legends beta and after a stint in playing HoN, he shifted towards Dota 2 due to the announcement of the first International and began watching the game hearing TobiWan commentate during the tournament. When Blaze later received his beta key, he switched to Dota 2.[1]

With a desire to be within the Dota 2 scene, he started casting amateur tournaments and in-house leagues to obtain experience as a caster and later working on semi-pro tournaments. Since then he has participated in all of The Summit tournaments since season 2 as a caster and an occasional observer, once for the Russian stream.[2]

Following the first international, Blaze became fixated to the following tournaments such as the first The Defense tournament and after watching with his wife, his wife later began asking him "if you so much about this, then why don't you just do this". While reluctant at first, he later decided to make her words into action by starting off watching Purge's guide of how to be a caster [1]. Since then, Blaze began started recording and uploading videos with his first in July 2012 and his first live broadcast was in September later that year [3]. Starting off casting on his twitch and YouTube channel called "BlazeCasting" he began casting at in-house leagues and amateur tournaments such as Team-Liquid inhouses, SECS and DotaNoobs. He was later featured in The Premier League having casted at times for 10 hours straight.[2]. Blaze was also featured during the Shanghai Major hub.

While primarily as a caster, Blaze has also been acting as an observer. He was announced as an observer for The Summit/2 and has been an observer whenever he was positioned. While observing he has learnt from other observers such as Weppas and PimpmuckL on observing techniques and actions.

While starting off casting during the time at Beyond The Summit, Blaze was subject to criticism especially on reddit threads and used the helpful criticism as constructive feedback to further improve as a caster and worked on his mental strength, saying that it all comes down to psychology. While improving in certain aspects he also completed a voice training course and purchased improved production equipment.