Buildings are defensive structures found on the map at the start of each game. They are immune to most spells, have Fortified Armor, and are immobile. Destroying a structure rewards heroes with a gold bounty, similar to killing creeps and heroes. There are several kinds of buildings, each with their own role. 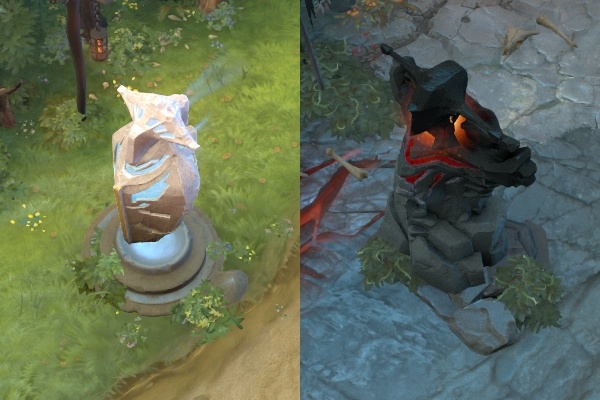 The main line of base defense, towers are the primary buildings that can attack. Both the Radiant and the Dire have three lanes which are guarded by three towers each. Their Ancient is guarded by two neighboring towers. Towers are a higher tier depending on how far they are in the lane. Every tower, except for Tier 1 towers, are invulnerable until the lower tier tower in front of it is destroyed. The two Tier 4 towers defending a team's Ancient become vulnerable if any Tier 3 tower is destroyed. Barracks do not have to be destroyed to make these towers vulnerable. Both Tier 4 towers must be destroyed in order to remove the Ancient's invulnerability.

Towers can be denied, just like creeps, once they have 10% health or less. Denied towers give half the bounty to the team that denies it, and half to the enemy team.

Towers have a specific targeting priority that determines which enemy it will attack. Listed from highest priority to lowest.

Towers do not attack neutral units.

The tower will only switch targets under three circumstances:

Targeting
Aura
Affects
Self
The presence of enemy heroes causes the tower to brace itself. The tower's armor increases for each nearby enemy hero.
Notes

Targeting
Aura
Affects
Self
Structure takes reduced damage, and quickly regenerates any damage taken while no enemy creeps are nearby.
Notes 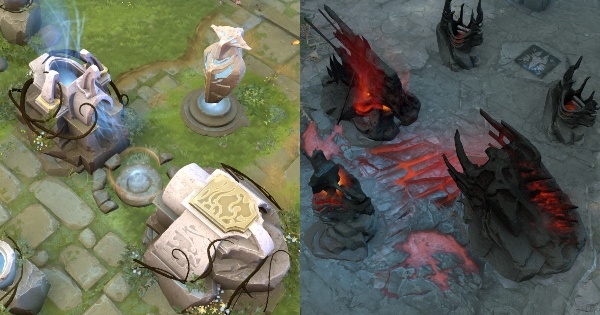 Barracks are buildings that spawn Lane Creeps and are defended by Tier 3 towers. There are two barracks for each lane. The Melee Barracks is always to the right and the Ranged Barracks is always to the left, no matter which faction's side of the map you are on. Destroying an enemy Barracks grants your team's corresponding lane super creeps. For example, if you destroy the middle lane's Melee Barracks, your middle lane will now spawn Super Melee creeps.

Destroying all of the enemy base's barracks will cause an announcement to sound, alerting both teams that you are now spawning mega creeps. This upgrades Super creeps to Mega Creeps, making them even more powerful. See Lane Creeps for more details. Creeps will always spawn, regardless of whether there is a barracks or not. Barracks are invulnerable until the corresponding tower that guards them is destroyed. 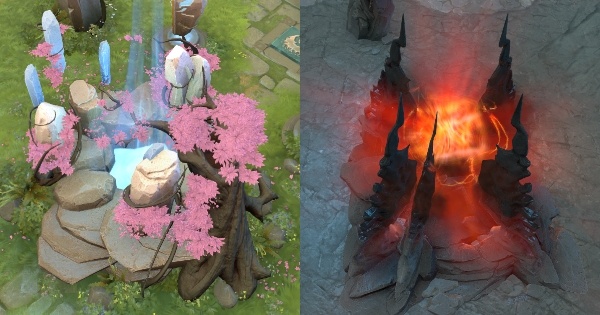 Ancients (also known as Thrones) are massive structures and the main objective. To win, your team must destroy the enemy Ancient. Ancients have no offensive abilities, but are guarded by towers and powerful team of five heroes. The Ancient is invincible until both Tier 4 towers are destroyed. 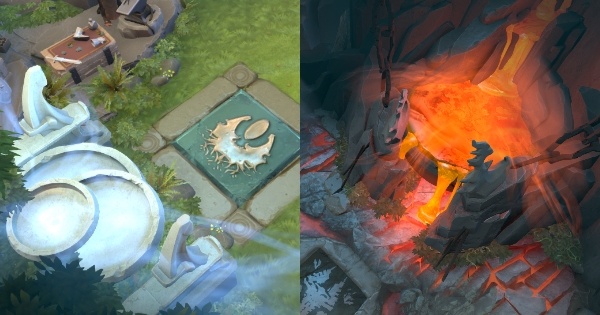 The fountain is a structure located in the respawn area of each base, and provides a healing and mana regeneration aura to all allied units near it. 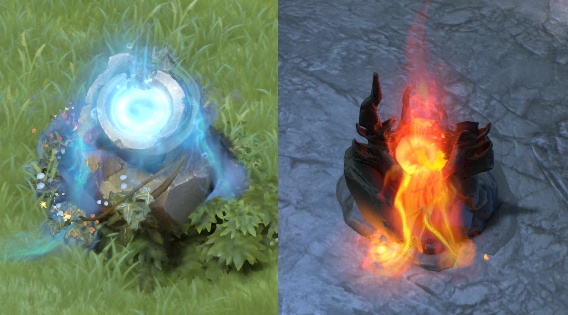 Shrines are regenerative structures. Each team has 1 Shrine on the map, near to Roshan. They can be directly teleported to just like all other team buildings. Shrines are invulnerable until a Tier 3 tower is destroyed. Shrines do not have vision.

Targeting
No Target
Affects
Allied Heroes
Allied heroes can right click to activate it, generating an aura that lasts a few seconds. The aura provides health and mana regeneration per second.
240
Notes 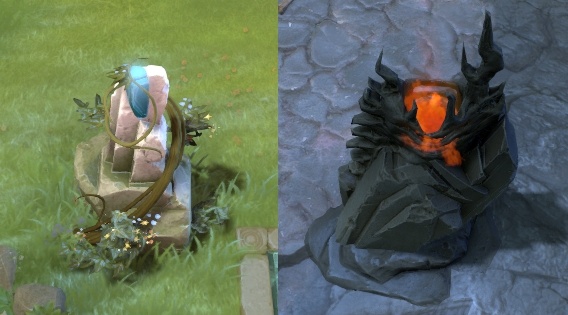 Pillars or Effigies are smaller structures that act as buffers within a base, making creeps take longer to reach actual towers and give the base's defenders more time to act. Invulnerable until a Tier 3 tower is destroyed.

There are two of these on the map, located where the Side Shops were previously. Right clicking to channel it takes several seconds and then you gain control over the outpost. Converts faster with more allies channeling. Having control over an outpost grants you bonus XP upon initially capturing it, and at 10 minute intervals on the game clock. It also provides your team unobstructed vision in that area and allows you to TP to it. Outposts are inactive for the first 10 minutes of the game and cannot be captured until then.

Glyph is an ability usable by any player on the team. It renders all buildings and lane creeps owned by their team invulnerable for a few seconds, with a long cooldown shared by allied players. It also gives Tier 2+ Towers multishot attacks to hit additional targets. This can be used defensively to stop enemy pushes or slow them down long enough to organize a defense. It can also be used offensively to allow your creeps to survive longer and disable backdoor. A team's glyph cooldown is refreshed (after a 1 second delay) if one of their own Tier 1 towers is destroyed.

Glyph cannot be used until the 3:00 minute mark in-game.

Scan is a targeted area of effect that lasts for a few seconds. Starts on cooldown and has a global team-wide cooldown. It indicates whether there are enemy heroes in the selected area. The minimap indicator is green when there are no heroes, and is red with beeping when enemy heroes are detected.

Considers Smoked units. Does not show how many heroes there are, just if there are any enemies. Enemies do not know when your team casts it.

Targeting
Point Target
Affects
Self
Scans a targeted area for a few seconds. Indicates whether there are enemy heroes in that area.
210
Notes