At the base of the Bleeding Hills stretches a thousand-league wood—a place called The Hoven, where black pools gather the tarry blood of the uplands, and the king-mage Sutherex sits in benevolent rule. Once a sworn protector of the Hoven lands, Clinkz earned a reputation for his skill with a bow. In the three-hundredth year of the king-mage, the demon Maraxiform rose from sixth hell to lay claim to the forest. In response, the king-mage decried an unbreakable spell: to any who slew the demon would be granted Life Without End.

Unaware of the spell, Clinkz waded into battle, defending his lands against the demon's fiery onslaught. Clinkz drove Maraxiform back to the gates of sixth-hell itself, where on that fiery threshold the two locked in a mortal conflict. Grievously wounded, the demon let out a blast of hellfire as Clinkz loosed his final arrow. The arrow struck the demon true as hellfire poured out across the land, lighting the black pools and burning Clinkz alive at the instant of the demon's death. Thus, the mage's spell took effect at the very moment of the archer's conflagration, preserving him in this unholy state, leaving him a being of bones and rage, caught in the very act of dying, carrying hell's breath with him on his journey into eternity.

When Clinkz stalks invisibly through the battlefield, none are safe from ambush. Swift of foot and arrow, he rains fiery death upon his foes, then retreats to absorb life from the creatures of the forest as he prepares for his next assault.

QT
Targeting
Point Target
Affects
Enemy Units
Damage Type
Physical
Clinkz channels for a duration then shoots piercing arrows in the target direction up to a distance away that hit all enemy units applying a percentage of Clinkz' attack damage and attack modifiers.
30/26/22/18
40/55/70/85
It's hard to say whether the blur around the Bone Fletcher is from his flaming heart or his speed with the quiver.
Searing Arrows

EW
Targeting
No Target
Affects
Self
Clinkz moves invisibly through units until the moment he attacks or uses an ability.
20/19/18/17
17/16/15/14
10
75
With a burst of fire and puff of smoke, the Bone Fletcher was nowhere to be seen.
Notes

RC
Targeting
Unit Target
Affects
Units
Damage Type
Instant Kill
Consumes a target friendly or enemy creep, gaining a percentage of its hit points as max health and damage. Can be casted without breaking Skeleton Walk invisibility.
80/70/60
100
Sutherex' bond of life and death has become a part of Clinkz, and his old bones are refreshed with repetition of the pact on lesser beings.
Notes

DE
Targeting
Vector Target
Affects
Enemy Heroes
Damage Type
Physical
Clinkz summons an army of fiery skeleton archers.
80
150
It's hard to say whether the blur around the Bone Fletcher is from his flaming heart or his speed with the quiver.
Notes 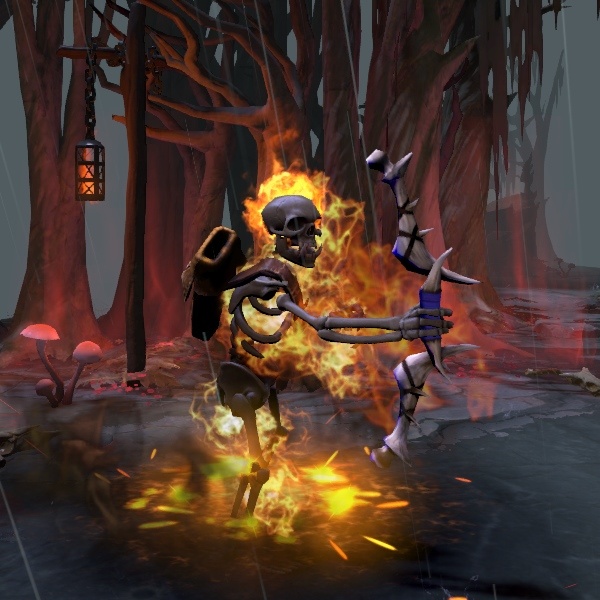