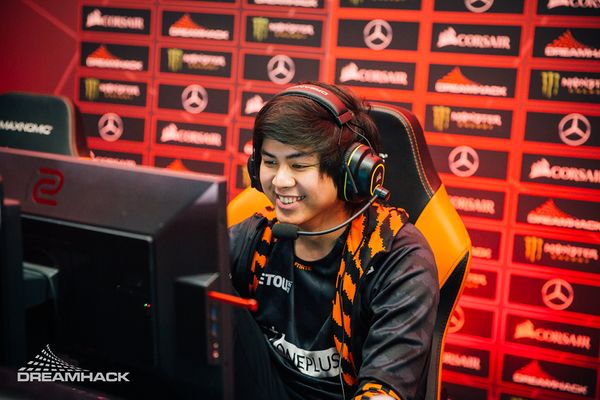 Djardel Jicko B. "DJ" Mampusti (formerly known as Chrissy) is a Filipino professional Dota 2 player who is currently playing for Fnatic.

DJ's first roots of DotA began in his first year of high school when his classmates taught him how to play the game. He played Sniper initially due to the similarity of his first name (Djardel vs. Sniper's alternate name - Kardel Sharpeye) and kept playing the game throughout his high school career. He continued to pursue in DotA as he saw his improvement in playing the game. The first known team he joined was Pag-Ibig. Since the team was composed of many players, whenever the team attended a tournament only the more senior members played.[1] The team was based in Marikina, where he used to play with Ryo and Soniq at IT Log Park a lot, until one day Soniq invited DJ join his team for a local competitive match.[2]

With Dota 2 being launched, many players along with DJ transitioned into Dota 2. With Valve making a partnership with Nexon, the scene saw a South Korean server and a $1.7 million USD league established in 2013.[3] After it was revealed that his current team-mate at that time, Cast was invited to help a newly formed Korean team EoT Hammer and saw that there were roster issues, DJ saw this as an opportunity and seized it so he can further continue his dream of playing DotA as a professional player. He joined EoT Hammer in November 2013 and moved to South Korea the following month. Adapting to South Korea and their culture was difficult, along with the search for a sponsor as his income was only from his winnings. EOT Hammer managed to place fourth in Nexon Sponsorship League Season 2 and runner-up to Zephyr in Nexon Sponsorship League Season 3. On May 4, 2014, EOT Hammer went under a new name called Rave, and DJ along with most of its members continued their run under this label. DJ played either the mid or offlane depending on Cast's decision, the captain & drafter at the time. His first offline tournament under Rave saw them at the semi-finals of I-league Season 1 and 4th place at MSI BEAT IT 2014.

Their achievements and form over the new year saw them invited by Valve to their first marquee event besides The International, DAC 2015. Despite being coined as underdogs in the tournament, Rave managed to reach 5-6th place in the tournament, despite a 12th-place position in the group stage and two consecutive tiebreaker days, and even managed to knock off Invictus Gaming in the loser's round 2 bracket. This tournament was a beginning of popular attention for DJ as he became widely known of beating TongFu in a match in the group stage during the tournament, showing a flawless display of Storm Spirit, with a score of 14-0-12. However, after the tournament, Rave saw a drop in form and failed to win qualifying matches, most importantly coming short in the The International 2015 South East Asian Qualifiers, and on June 16, 2015 DJ chose to leave Rave to not drag the team down any further and had plans of making a new team.[4] On the 19th June 2015, it was announced that he would be joining MSI-Evolution Gaming Team, but this proved to be short lived.

During the post-TI5 shuffle, it was announced on the 26th of August that Fnatic acquired DJ for their team. DJ, happy with the pickup, replied: "Coming from Korea to the Philippines and then to Malaysia, I am no stranger to living abroad now. I think joining Fnatic is a very good opportunity for me to prove myself and I am extremely thankful I was given the chance to do so. Hopefully, I can represent Philippines on an international stage once again! #fnaticpinoypride".[5] In September he was awarded player of the month by Mineski[2] Despite a rough start from the second half of 2015, DJ began to show his influence as a support on the international stage during mid 2016 when he placed into the top 6 during the Manila Major 2016 after producing multiple Black holes in critical situations for Fnatic against LGD Gaming in the deciding match of the best of three[6] and later finishing third place in the Starladder i-League StarSeries S2. After finishing fourth place at The International 2016, he departed Fnatic.[7] During the transfer period after TI6, he played with Execration as an unofficial player and won the MPGL Southeast Asian Championship. He later joined Execration as an official player.[8]