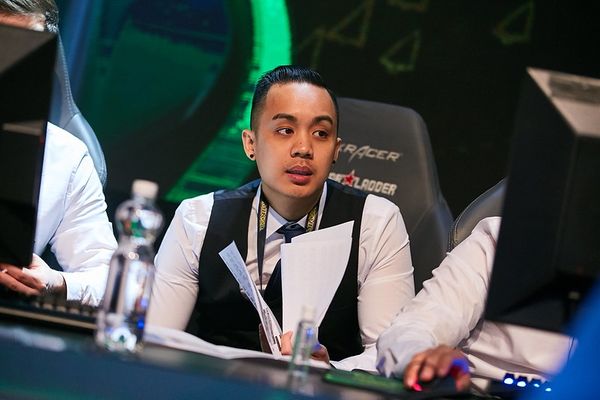 Jimmy "DeMoN" Ho is an American professional Dota 2 player who previously coached business associates and last played for Aristotle. He is also sponsored by Red Bull.[1]

DeMoN has a competitive background in DotA. He was notably a member of Evil Geniuses, Nirvana.Int and Meet Your Makers. DeMoN is a dynamic player who often executes high risk high reward plays, so much so that the term "Classic Jimmy" was coined for any time one of these plays went awry for Jimmy.[2]

DeMoN, Fear and Merlini played together in several DotA teams (most notably Nirvana.Int with Puppey and KuroKy).

DeMoN attended The International 2011 with Meet Your Makers, and ultimately split a $80,000 prize with his teammates as they took the fourth place at the event. A few days after this achievement, on August 28, MYM disbanded and DeMoN became a free agent. In October 2011, he was picked up by Evil Geniuses as a member of their initial Dota 2 roster.[3] Among his teammates was his former partner in EG's DotA 2009 roster, Fear. DeMoN and his new teammates made their first steps together in The Defense Season 1, delivering an encouraging performance in the group stages as they qualified for the upper part of the playoffs. Evil Geniuses eventually took third place at the tournament, losing to Quantic Gaming in the loser's bracket finals. The team encountered number of rosters issues which included the departure of several key players such as Pajkatt and MiSeRy. The Evil Geniuses Roster finally stabilized with the addition of Maelk, DeMoN's former teammate from MYM, as well as BuLba and UNiVeRsE in May 2012. On May 25, 2012, he and the rest of EG were invited to participate in the The International 2012 in order to compete for its $1,600,000 prize pool. After impressing in the group stage, they were knocked out from the winner bracket by the team that would proceed to win the tournament, invictus Gaming, with a 1-2 score. Their run in the loser bracket would prove to be short, as they were knocked out immediately by TongFu. Following The International 2012 the team underwent a roster shuffle with the addition of Jeyo and Bdiz to replace BuLba and UNiVeRsE.[4]

After The International, EG showed their strength in a number of tournaments, winning It's Gosu Monthly Madness #2, EIZO Cup #1 and the AVerMedia Dota 2 Cup, as well as finishing second in the Premier Tournaments Raidcall Dota 2 League Season 1 and DreamHack Winter 2012. EG's success, however, was short lived as the team was marred with inconsistent play. In this time, DeMoN and his team quickly became infamous for their tendency to throw away large leads that they had gained throughout the game, and some had labelled him as a weak link. On May 1st, 2013, Maelk the long time captain of EG, retired from competitive play, forcing the team to immediately replace him with SexyBamboe. The teams lackluster play and mid-season roster shuffle likely cost the team their The International 2013 invite, and the team failed to qualify for the tournament placing fourth in the The International 2013 Western Qualifiers. This would mark the first International that he did not participate in. On September 19th, 2013, after nearly two years of being a part of Evil Geniuses DeMoN was released from the team.

On September 29th, 2013, he created Take Five in order to participate in RaidCall EMS ONE Fall Americas, which the team would go on to win. Shortly after, Take Five disbanded and DeMoN wound up on team Dignitas. On October 18th, 2013, Dignitas won the MLG Full Sail Invitational, however the team disbanded in the coming weeks due to internal conflicts. With no prospects of joining a North American or European team, DeMoN decided to go to South Korea and participate in Nexon Sponsorship League/Season 2 with MVP Phoenix. DeMoN stated that it was a goal of his to help advance the Korean DotA scene, and on December 28th, 2013, DeMoN lead MVP Phoenix to a 3-2 victory over 5 in QO in the NSL Season 2 finals.

DeMoN's success would continue in 2014, as he would display his skill and ability to work within a team by being a stand in for several teams. On January 10th, 2014, DeMoN stood in for Fnatic at the Dota 2 League Season 4 LAN finals. With solid play, DeMoN helped Fnatic achieve a 2nd place finish, beating teams such as Vici Gaming and Alliance on the way. On February 18th it was announced that DeMoN had joined Team Dog, however he would announce that he had parted ways with the team shortly after. On March 7th DeMoN stood in for Cloud9 at the Monster Energy Invitational and helped them achieve a 2nd place finish. Shortly after, DeMoN would find himself as a stand in for Team Liquid, after the team parted ways with FLUFFNSTUFF. Jimmy found himself in unfamiliar territory as he was forced to play support for the team, a role he had not yet played competitively in Dota 2. On April 9th, 2014, it was announced that Jimmy had received a personal sponsorship from Red Bull. On April 14th, after several weeks of play with Team Liquid, DeMoN was officially announced as a member of the team.[5] During this time DeMoN would adopt the moniker "Pegasus", a combination of the Liquid horse and the wings from Red Bull's slogan.

Leading up to The International 4 Team Liquid did not have much success, despite several a month long boot camp at the Red Bull headquarters.[6] During The International 2014: Americas Qualifiers Team Liquid beat out many of the amateur teams, but eventually fell in the finals to the newly formed North American Rejects. Despite winning a spot into the Wild Card series for TI4 many people viewed this placing as another disappointing result for a roster filled with talent. In order to perform better in the years largest tournament Liquid decided to switch DeMoN to the offlane. Despite the criticism Jimmy and his teammates faced prior to TI4, the team would come together and exceed all expectations. During The International 4 Wild Card Team Liquid defeated both CIS Game and MVP Phoenix 2-0 to qualify for the group stage. During the group stage Liquid managed to beat Invictus Gaming, Team DK, Evil Geniuses, and the eventual champions Newbee. The team however failed to advance from The International 4: Playoffs Phase Three as they fell to LGD Gaming 0-2. On July 29th, DeMoN and Liquid parted ways.[7]

2015 proved to be a largely unsuccessful year for DeMoN marked by frequently disbanding teams, and failures to qualify for major tournaments. His team Champions of Summer's Rift was removed from The International 5 regional qualifiers due to roster changes and subsequently failed to make it through the open qualifiers to regain their spot.[8] After announcing his new team As1- who were supposed to play in The Shanghai Major open qualifiers, he surprisingly played with FDL, later confirming that As1- disbanded.[9]

In the lead up to The International 6 qualifiers it was announced that DeMoN was joining Peruvian team Infamous.[10] A short time later, however, it was revealed that DeMoN had actually joined Philippines based TnC Gaming. DeMoN later stated that his switch from Infamous to TnC Gaming was motivated by the respective organizations' willingness and ability to fly him out to play.[11] After a rocky start losing in the first SEA open qualifier for the International, Jimmy managed to captain his team through the second open qualifier as well as the SEA regional qualifier to qualify for their first major offline tournament: The International 6. In a later interview DeMoN revealed he would have retired, had he failed to qualify for TI6.[12] At The International, TnC became one of the biggest story lines of tournament. They upset the tournament favorites OG in the lower brackets of the main event, before losing to Digital Chaos, to finish in the top 8. This marked a return to top-level competition for DeMoN that he had not seen since his part with Team Liquid. In the post International roster shuffle DeMoN joined the reformed Fnatic, along with teammates Raven and eyyou.[13] After failing to qualify for the Boston Major and a shock quarter-final exit at ROG MASTERS 2016, he later departed the team and decided to move back to the United States.[14]

The return to North America saw DeMoN forming Team Onyx, along with BuLba, mason and DuBu.[15] The addition of Abed meant that the team had its roster locked for the Kiev Major Qualifiers.[16] Despite not being seen as the favorites to grab the sole qualifying spot that lead to the Major, Team Onyx recorded notable victories against Team NP and Complexity Gaming in the knockout stage of the tournament, ensuring them first place, and meaning DeMoN would participate in his first Valve Major tournament (excluding The International).[17]

DeMoN was banned from Valve events on January 10th, 2021 for previous misconduct.[18]