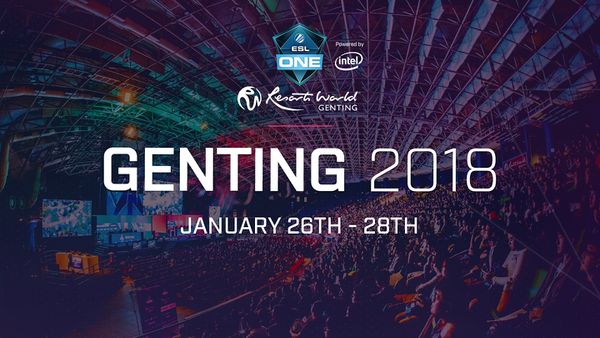 ESL One is returning to the Arena of Stars, at Resort World Genting, for the second Minor in Southeast Asia. With a prize pool of $400,000 USD and 400 qualifying points up for grabs, ESL One Genting is the most prestigious of all the Minors held this season.

The talent for the English broadcast was announced on January 16th, 2018.[3]

Ohaiyo stood in for

Fata in the semifinal.[13] DPC points were split equally between the two players.[14]

On 18th January 2018, ESL announced that Facebook would be their main English and Portuguese broadcasting platform for CS:GO's ESL Pro League and the ESL One circuit.[15][16] The announcement resulted in an outcry on social media where users primarily critiqued the decision because they felt Facebook provided an inferior viewing experience to Twitch and did not allow mobile viewing without the Facebook app.[17][18] In contrast to the community backlash, many personalities spoke out defending the deal, arguing that it would allow ESL to produce better tournaments and reach a greater audience with this partnership. In addition, several emphasised the importance of broadcasting rights and deals.[19][20][21]

Despite the official broadcast being aired on Facebook, Valve's intervention in the previous broadcasting controversy[22][23] enabled individuals to cast matches from their stream with no commercial or monetary intent or in a way that directly competes with the official broadcast's stream.[24] However on the inaugural day of the tournament, several Twitch streams including that of BSJ, Australian caster MLPDota, and the Portuguese Beyond the Summit coverage, were shut down by DMCA takedowns;[25][26] ESL later clarified that they would not allow competing English and Portuguese language broadcasts that monetized content from the tournament.[27] After continued community backlash, ESL further stated that there would be no actions or takedowns on unmonetized/non-commercial ESL One Genting streams.[28]

On 25th January 2018, Valve reiterated its stance on Dota streams by noting that their existing policies allowed for up and coming casters and community figures to stream off DotaTV, though commercial organizations were not. They further clarified that only they could issue DCMA notices for content being streamed off DotaTV, as long as the stream did not use the organizer's commentary or camera work.[29]