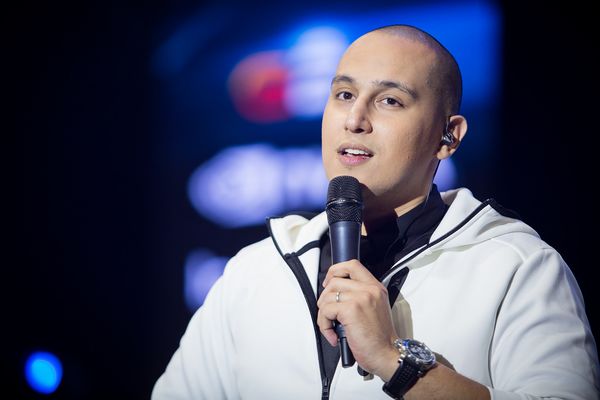 Eri "Eri" Neeman is an occasional host for Dota 2 tournaments.

Eri was born in White Plains, Quezon City and for a few years he started school in the area, but subsequently moved to Pampanga due to his dad's job offer in another area and for the majority of his lifetime he lived there. He taught Koreans English as a source of income while learning in school.[1] He began his career as a model when he was 15 years old with the concept of wanting to be onstage and decided not to complete his schooling due to his dissatisfaction towards it, and instead played billiards, video games such as Counter-Strike and later began to venture into the showbiz industry.[1] In his developing years, Eri initially wanted validation and fame by becoming a MTV VJ, but decided to focus on alternative projects to further develop as a better host and reach his goal of a MTV VJ.

People are people. We are built to connect. You give people an energy that is sincere, that is authentic, that is coming from a place where you want to entertain or do something good for the event, you will connect. And a host is all about connecting with the audience.
(Eri Neeman on his philosphy as a host in March 2016 [1])

Eri started off as a Radio DJ for Radio U92 [2] and later did improv for about 3 years at SPIT (Silly People's Improve Theater) and performed a live improv in front of an audience of the game, "New Choice".[3] Eri also co-founded ComedyManila, which he acted as a stand-up comedian for six years trying to revolutionize the Philippine comedy scene and once travelled the iconic, Gotham Comedy Club in New York City and did performed a live gig.[4]

During his time as a stand-up comedian he also was noted for his contribution towards "Bubble Gang", (equivalent to Saturday Night Live in the Philippines) and began as a writer for the show and later conceptualized the two sketches that did received popularity, which was "Wonder Boys" and "Boy Pick Up" [5] Eri has acted as a wedding host in various occasions with positive reception and has represented Philippines in the Hong Kong comedy festival in 2010.[6] After being accepted as a MTV VJ through years in the entertainment industry, MTV was made defunct six months later and began to re-evaluating his decisions accompanied with the advice of his girlfriend, he decided to focus on hosting because he felt happy there.[1]

He initially started hosting video games with MOG TV in 2011 after further invitations as a host in South-East Asia, his first big eSports event, MSI Beat IT 2013 he decided to create a small contest called the "Macho man Contest" which involved posing to a girl through facial expressions and body movement while romantic music is played in the background.[7] After MSI Beat It, he was later invited to a Dota 2 tournament, GMGPL in November 2013 and became widely known introducing the contest into the Dota 2 community and was conducted before the lower-bracket finals of the tournament.[8] Winter later won the contest and after due to popular demand, it was later introduced into other tournaments for Dota 2 during intermissions between game series.

Although Eri was an enthusiastic gamer since birth having played a number of games such as Tekken, Street Fighter and Unreal Tournament, he never played DotA nor its sequel Dota 2 despite the plethora of Dota players in the Philippines. In 2016, he was invited as a host for ESL One Manila 2016 and conducted an AMA on reddit following the event. After Valve's major, he was featured in a video with ODPixel and SirActionSlacks during the Manila Major teaching them how to pronounce Filipino slang. He later participated in ESL One Frankfurt 2016.

His filmography can be found here.