The people of Ashkavor crowded around the temple square, eager to witness the ascension of their new guardian—to stand near the man as he bound their souls to his own. But as his final brush strokes fell against the runestone, and the bond of a new Ascended One was forged, everyone—even those who'd stayed in their homes—could sense that something had gone terribly wrong.

He knew the cause instantly. The droplets of ichor he'd procured to amplify the potency of his inkpots had instead contaminated them, and the power of the binding spell he'd cast now threatened to consume him. An inky corruption snaked upward from the runestone, along the handle of his brush, soon overtaking his hands. From there it spread quickly. Once it overcame his face and his mouth, he couldn't have screamed even if he'd wanted to.

All of his life he'd calculated on how to attain ever greater powers than the limits presented by his teachers would allow—going so far as to break the sacred prohibition against augmenting the inks. Indeed, with the wellspring of the Ascended bond open to him, he felt a measure of power coursing into his soul like he'd never imagined. His greatest triumph was upon him, if he could only survive it.

He drew deep from the power of the bond, pushing back against the corrupted ink flow. A great moan filled the air—the collective cry of his people. Some swayed on their feet. The weakest collapsed. Many tried to run. And still deeper he pulled from their bloodline reservoir. But it wasn't enough to stop the ink tide.

It was only when the breath trapped in his lungs began to fail him, and the inkpool darkness fully encased him, that he saw his way out. The bond he'd made with the Ashkavoran people—his people—meant to be drawn upon only in service of their protection... It flowed two ways.

With a final surge of strength—this time directed by more than just blind repulsion—he pushed the ink torrent into the bond itself.

Slowly, he felt the tide retreat... and heard the awful wails of his people as the corruption in turn rolled over them. When at last the ink relented, his eyes opened upon a world changed. The Ashkavoran people as he knew them were gone. Every last soul was transformed into terrifying shades of their former selves—comprised no longer of blood and bone, only viscid, tainted ink.

Skilled at manipulating battle from the outskirts, Grimstroke studies every movement and assesses each line, deciding when to emerge from inky darkness to disable his victims and bind them together with a swipe of his brush. He delights in unleashing phantom thralls to vex opponents, as he carefully considers how to dispatch multiple enemies with one fateful stroke.

QF
Targeting
Point Target
Affects
Enemy Units
Damage Type
Magical
Grimstroke paints a path of ink with his brush, damaging and slowing enemies. The damage is increased with each enemy the ink hits.
11/9/7/5
100/110/120/130
The corruptive force of Grimstroke's ink, drawn from the reservoir of his fallen people, consumes any enemy caught in its path.
Notes

WE
Targeting
Unit Target
Affects
Enemy Units
Damage Type
Magical
Summons a phantom that moves quickly towards the target, latching to it when she arrives. Once latched, the phantom damages and silences. If she survives the full latch duration, she rends her victim for heavy damage and refreshes the cooldown of Phantom's Embrace.
36/30/24/18
80/100/120/140
Grimstroke holds no sorrow for the downfall of his people. Only for Yaovhi, she who was most dear to him, does he feel even a semblance of longing.
Notes

EW
Targeting
Unit Target
Affects
Allied Units
Damage Type
Magical
Grimstroke shrouds an allied unit in ink, increasing its movement speed. Enemies in range of the allied unit are damaged with inky tendrils over time. After a few seconds the swell triggers, applying damage and stunning the area around the unit. The swell damage and stun duration depend on how long ink tendril damage was inflicted to enemy heroes across the duration.
30/26/22/18
25/21/17/13
10
120/130/140/150
Now that the rise of the ink tide no longer threatens to overwhelm Grimstroke, its tendrils of power are never far from his hand.
Notes

RB
Targeting
Unit Target
Affects
Enemy Heroes
Binds a targeted enemy hero to its nearest allied hero within the bind radius, preventing both from moving away from each other. Any enemy unit target spell that a bound hero receives also gets cast on the other bound hero. If soulbind is broken before the duration expires, the initial target will be bound to the next nearest allied hero in the radius.
100/75/50
150/200/250
The Ascended were chosen sons of Ashkavor, granted immense power by the bonds forged between their own souls and those they were charged with protecting. In the years that follow the ruination of his kin, Grimstroke discovered much more sinister applications for the binding rituals...
Notes 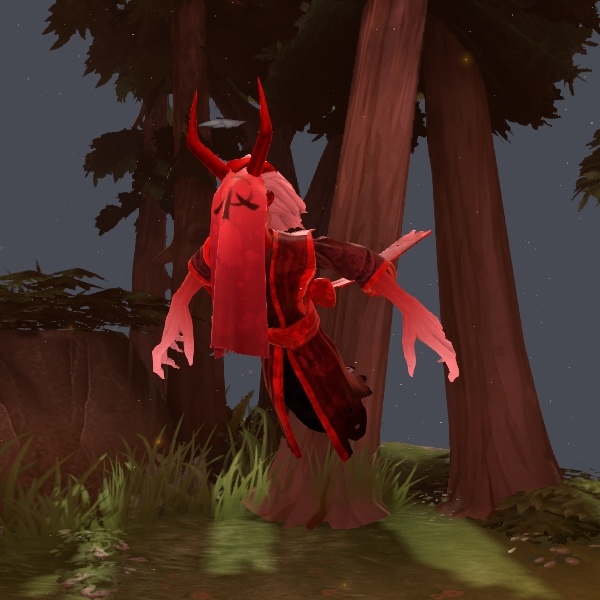