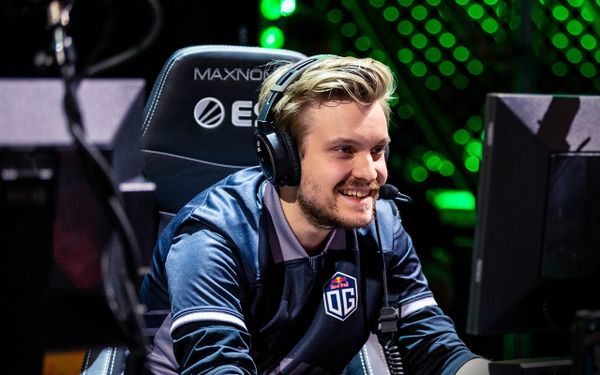 Jesse "JerAx" Vainikka (born May 7, 1992) is a Finnish Dota 2 player who last played for Evil Geniuses.

JerAx made his name in Heroes of Newerth, where he played for a number of teams including "Dirty Minds" (with Era and SingSing) and "Man the fuck Up"/"KD-Gaming" (with Era).[1] He then did a compulsory military service in the Finnish navy, and when he had finished it, started playing Dota 2.[1]

On the 15th January 2018, JerAx unveiled his own merchandise website JerAx.GG.[2]

JerAx began his Dota 2 career in the Finnish team Rat in the dark as a support player. After playing with them for a month he was approached by SingSing, and JerAx joined his team, QPAD Red Pandas as a trialist. A while later he was announced as a full member of the team.[1]

After more than a year of absence from the Dota 2 professional scene, JerAx became a part of the newly formed Finnish squad 4 Anchors + Sea Captain alongside Trixi, MATUMBAMAN, Vaalix and Buugi. JerAx played the #4 position for the team, in addition to serving as the overall team captain and drafter. He left the team in early January 2015.[3]

A few days later, JerAx joined the international team Team Tinker. After a couple months of disappointing results, JerAx parted ways with the team on March 6th, and was announced to be joining Korean team MVP HOT6ix. The team quickly became a powerhouse in the South East Asia scene, and after winning MPGL Season 7, the team qualified for The International 2015. Despite their strong play leading up to the tournament, MVP HOT6ix disappointed at the main event. They finished last in their group, and were knocked out in the first round of the playoffs by Invictus Gaming.

In the post TI5 shuffle, JerAx left MVP HOT6ix, and was revealed to have joined 5Jungz after the team was invited to the ESL One New York 2015 European Qualifiers. After a string of good results, he was picked up by Team Liquid. With winning The Defense Season 5 and reaching third place at WCA 2015, JerAx ended the 2015 calendar year on a high note.

JerAx continued his good form over the new year with double runner-up places in the Frankfurt and Manila majors respectively. With a consistent run of being second, JerAx won his first premier offline tournament in 2016 at EPICENTER. Liquid was invited to The International 2016, which would be JerAx's second TI attendance, where they finished top 8, after falling to Fnatic.

He left Team Liquid during the post-TI shuffle,[4] to join rivals OG.[5] The move would prove to be very rewarding, as he became a Major champion with a victory at the Boston Major. It would be his third showing in a Major Grand Final.

In April 2017, JerAx and OG came second at DAC 2017, falling 0-3 to Invictus Gaming in the Grand Finals. Despite this loss, the team came back with a vengeance at the second and final Major of the season, the Kiev Major, beating Virtus.pro 3-2 in a nail-biting series. Another top 8 finish at his third International would prove to be disappointing, as his team was heavily favored to win.

Despite this, he would continue on with OG for the upcoming season. However, after the departure of their carry ana, OG's performance in the new season dropped immensely and the team would fail to qualify to a number of Majors and Minors. Victory at MDL Macau would be the only notable achievement for the remaining year.

Despite a marked improvement in qualifiers, results at LAN tournaments were still a far cry away from the previous season and were further marred by his team's roster troubles. Following another disappointing early exit at ESL One Birmingham, JerAx's teammates Fly and s4 shockingly left the team to join a similarly struggling Evil Geniuses.

With only a few months left before qualifiers for The International 2018, JerAx together with his remaining teammates, coach-turned-player Ceb and OG co-founder N0tail, were forced to scrape together a roster. They managed to bring back ana to the team and also recruited JerAx's countryman Topson, who was a well known as a pubstar with little to no professional experience to date. OG would take the European qualifier spot, but little was expected of the young roster, many even going so far as ranking the team last among the field of contenders.

However, JerAx and his team overcame all odds. After barely securing an upper bracket berth, the team cruised to the Grand Finals, where they beat heavy favorites PSG.LGD 3-2 in what is considered the best TI finals to date. JerAx's impactful support play earned a lot of praise, particularly his Io and Earthshaker performances in the Grand Finals being highlighted.

Following his greatest achievement to date, JerAx and OG decided to take a longer break post-TI.

In January 2019, JerAx and his teammates were featured in Valve's True Sight documentary, featuring the Grand Finals of TI8. It was JerAx's second appearance in this series, as he had already featured in the episode about the Kiev Major in 2017.

His return to the top tier of professional Dota proved slow, in part because carry ana had decided to take a longer break and the team was trying out different players as replacement. When their star carry returned to the active roster in March, the results markedly improved. Despite a lack of major championships, a series of good results and high placements in the second half of the season, earned his team a spot at The International 2019, via the Dota Pro Circuit.

This year, JerAx would not be underestimated at TI. The team breezed through the group stage and once again took the direct route to the Grand Finals, where they easily beat Team Liquid 3-1. JerAx's support play once again stood out, especially his Tiny, which was instrumental in their three victories in the Grand Finals. JerAx would be among the first people to win The International twice.

Following The International, JerAx and the entire team decided to once again take an extended break from professional Dota for the remainder of the year.

In January, JerAx shocked the Dota scene by announcing his retirement.[6][7] As reasons, he cited lack of passion for competing in Dota 2 and a desire to pursue another career.

I have been very fortunate to have my spot as a professional player, and I can’t quite understand how I ended up at this point. Small things could have been different, and I would have never made it. I’ve seen the progress of this community the last 10 years and I have infinite respect for the passion-fueled people behind it, as all those have cemented Dota’s place in esports. Without you this scene wouldn’t exist.

I want to thank every single person from Dota 2, that I’ve met, talked to or played with.

On January 28th, he was once again featured in Valve's True Sight documentary.

On November 20th of 2021, JerAx returned to the competitive scene by joining Evil Geniuses as a position 5.[8]

Following the team's disappointing performance at the Stockholm Major 2022, JerAx left Evil Geniuses and announced his intention to remain active in the scene as a position 4, 5, or coach.[9]

He made his LAN coaching debut at the Riyadh Masters 2022 for Team Liquid.