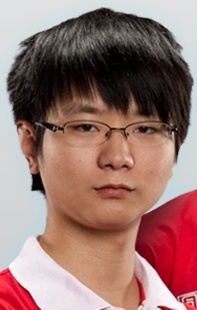 Zhao "Kabu" Kai was a professional Dota 2 player who is currently the coach of Typhoon E-Sports Club.

Born in Huainan, China in the province of Anhui, Kabu is a member of the second generation Chinese Dota players. He is known for his incredible Clockwerk play.

Despite winning the Dota 1 event of WCG China 2011 in a star-studded field, Kabu's team TyLoo fell victim to the Great Chinese Reshuffle as four of his teammates left the team leaving him the only remaining member. Since they had received invitations to The International 2011 prior to the reshuffle, the five players decided to attend. Arguably the strongest Chinese team a month before, they performed dismally finishing 9th-16th. As one of the players not invited to a team in the reshuffle, Kabu retired from Dota.

A month later, it became clear his retirement was only temporary, because Kabu accepted an invite to become the captain of fledgling team Tongfu. After some roster changes and picking up the core members of team PanDa, Kabu would lead the team to victory over WE in the East Qualifiers for The International 2012 earning them a prized qualification spot. The team went on to finish 7th/8th at the main tournament.

Tongfu underwent roster changes at the end of 2012 swapping out Kabu for LongDD. Kabu would be invited by Luo for his new team Rattlesnake officially formed in January 2013.

After TongFu disbanded, Kabu joined TongFu.WanZhou, whose roster was constantly changing. This was a completely new team with many young players. During this time, Kabu switched from offlane to hard support. Over a long period of time, the team did not perform well in tournaments and eventually in spring of 2015, Kabu along with the rest of the team was switched over to a main TongFu squad as the organization began using multiple squads.

In the following month that the squad was moved, TongFu went through many roster changes following a great Chinese reshuffle. More roster changes came after the reshuffle but eventually a stable roster was made with Kabu, XinQ, uuu9, zExBinGo, and lpc. Together the team quickly moved up the rankings in China, winning ESCC 2015, with many impressive Rubick performances by Kabu.