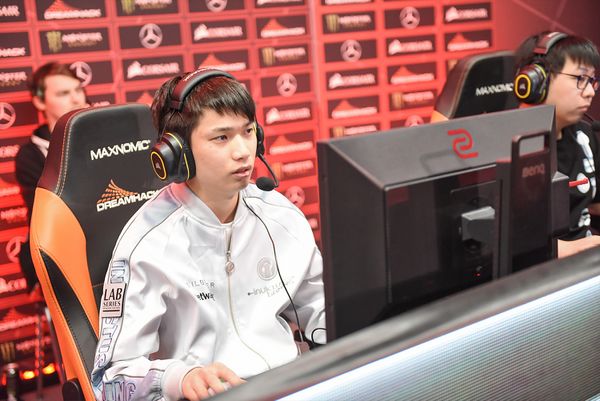 Hu "kaka" Liangzhi is a Chinese professional Dota 2 player who is currently playing for Royal Never Give Up.

Prior to his professional debut, Kaka was a well known pubstar in the Chinese Dota 2 scene, famous for maintaining a high MMR, and even occasionally topping the Chinese leaderboards.

Kaka joined HyperGloryTeam at the time of its creation. Around 2 months after the team's creation they won WVW National Electronic Sports Classic Season 1. Later on, they qualified for many premium-level tournaments such as WEC 2014 and i-League Season 2, accumulating prize money. Later on, HyperGloryTeam qualified for the Dota 2 Asia Championships and finished 11th in the group stage, allowing them to be in the 1st round lower bracket of the main event. After defeating and knocking out Natus Vincere, they were eliminated by Cloud9 and finished the tournament in 7th-8th place, winning $115,335. After this, Kaka and HyperGloryTeam played in the Chinese qualifiers for The International 2015 but were eliminated in the group stages. Following the early exit from the tournament, he joined EHOME during the post-ti shuffle on September 2, 2016 as a support.[1] He placed fourth in Valve's maiden major event, the Frankfurt Major 2015.

Into early 2016, he displayed domestic success winning Dota 2 Radiant and Dire Cup 2015, Shanghai Open Season 1 and MDL Winter 2015. However, after the conclusion of the Shanghai Major 2016 in early March, saw no Chinese team make it halfway into the main event, resulting in a major reshuffle in China. Kaka later joined Newbee and became the captain and drafter for the team. In mid 2016 saw a resurgence in power from Newbee with consecutive wins, totalling up to a 29-0 winning streak until their first defeat against OG during EPICENTER, where Kaka finished runners-up against Team Liquid. He cited that Newbee's team chemistry is strong and is able to play with better flexibility, and better personal tempo, in comparison to his tenure with EHOME.[2] He was featured in a player profile by Valve during The International 2016 [3] but finished 9-12th place.