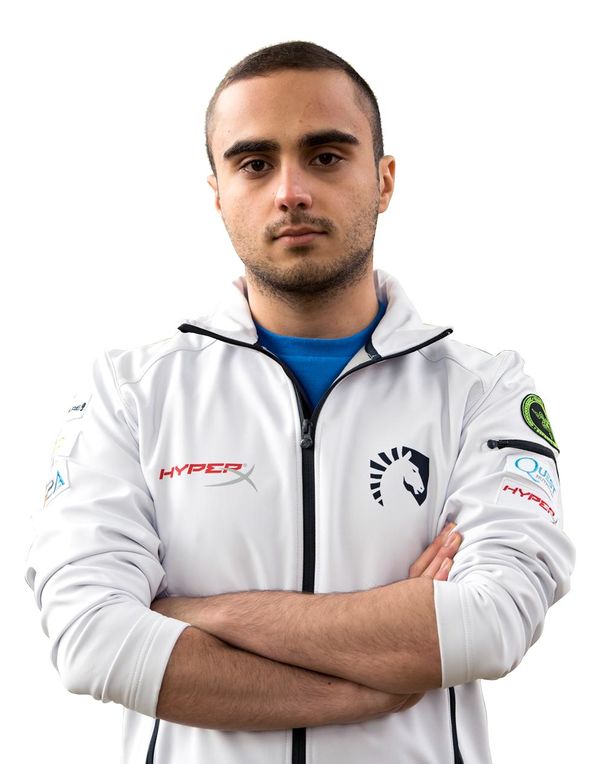 His player name is pronounced kuːroʊkiː.

KuroKy grew up in Berlin, Germany.[1] KuroKy suffered from disabilities to his legs, and would struggle to use his legs. He stated that this weakness was what led to him to play video games.

KuroKy played for a few German DotA teams before joining his first international team, mousesports, where he played with players such as Drayich. This mousesports lineup attended DreamHack Winter 2008 with Puppey acting as stand-in; this was to be the beginning of a long relationship between KuroKy and Puppey. KuroKy then joined Ks.int, which at one point had a total number of 9 players and looked more like a mix than an actual team. Some well known players in the DotA scene were on the team, such as Puppey, Vigoss and LevenT.

KuroKy's first public appearance in Dota 2 was The International 2011 along with the game's debut at Gamescom. He participated in the tournament under GosuGamers.net with teammates Kebap, Azen, and Mirakel. Unfortunately for them, they dropped all three group stage games and were eliminated by MiTH.Trust in the first round of the losers' bracket.

After the unsuccessful run at The International, KuroKy went on to play in several other teams with him as the star player; the teams included PANZER and 10,000th, which were also jokingly called KKy + 4. In May 2012, he joined Virtus.pro in the hopes to qualify for a spot to play at The International 2012.[2] They won their first round match of the West Qualifiers against mTw but were eventually eliminated by mousesports and zNation. However, he got his chance to play at The International 2012 when ComeWithMe ran into visa issues and mousesports invited KuroKy to the event in his place. A stroke of luck for KuroKy and the other mouz players happened when MUFC ran into visa issues and could not make it to Seattle, leaving an extra spot for the backup teams. mouz played a best of five series against World Elite to determine who would replace MUFC in the main tournament and they took the wildcard match handedly with a 3-0 score. The main tournament itself was not a success for KuroKy as he was knocked out in the first round of the playoffs and could not improve upon his results from The International 2011.

KuroKy joined mousesports on September 16 as a temporary member, along with Alex and Kebap, to fill their roster for SLTV Star Series Season 3.[3]

After a short and well received stay at Mousesports, KuroKy joined Natus Vincere on February 28, 2013 as their support player alongside former Ks.Int team-mate Puppey.[4] His first year on Na'Vi was very successful with many first-place finishes and a second-place finish at The International 2013. However, the second half of his Na'Vi career was largely disappointing and culminated in a 7-8th-place finish at The International 2014. He left Na`Vi on August 18, 2014.[5]

Following his departure, it was revealed on August 27th, 2014 that he was on the roster for Secret Team, a team he formed with Puppey. Joining this duo were friends and former teammates on Fnatic Fly and N0tail as well as s4 from Alliance. KuroKy initially played the carry position for the newly formed Team Secret but success eluded the team as their best result was a second-place finish at Star Ladder. A roster shuffle took place, swapping Fly and N0tail for Arteezy and zai from Evil Geniuses resulted in KuroKy returning to the support position alongside Puppey once again. This new Team Secret roster was more successful than the previous and, having won 4 consecutive LAN finals, they approached The International 2015 as heavy favorites. However, Team Secret exited the tournament surprisingly early to a disappointing 7-8th-place finish amidst severe internal issues.

Following TI 5 KuroKy left Team Secret to form a new team, 5Jungz, with himself as captain, where he handpicked his teammates: fellow German FATA- would play mid, the Finnish duo MATUMBAMAN and JerAx would be carry and roaming support, respectively, and Bulgarian offlaner MinD_ContRoL rounded out the roster. After a string of promising results the team was signed by Team Liquid[6]. Team Liquid was able to win The Defense Season 5 and also finished as runners up at The Shanghai Major 2016 with KuroKy playing the joint highest number of different heroes at the tournament. After finishing in the top four in his last three consecutive LAN events with the most being recent, 2nd at ESL ONE Manila 2016, KuroKy led this team to a breathtaking five-game series to 3-2 victory over the dominant Chinese team Newbee that had a 29-0 winning streak during the picturesque tournament EPICENTER at the Crocus City Hall, Moscow.[7] The pulsating series at the Russian capital over the course of a week saw KuroKy and his teammates secure their maiden LAN win of the 2016 calendar year. At the Manila Major, Team Liquid was once again able to reach the grand finals, but finished as runners up once again, this time falling to OG. KuroKy was tied with 343 for the highest number of different heroes played at the event. Unsurprisingly, Team Liquid was invited to attend The International 2016, however another disappointingly early exit would be in store for KuroKy.

In the wake of TI6, FATA- and JerAx would leave the team and their replacements were BuLba, from Evil Geniuses, and Miracle-, from rivals OG. The new competitive season saw Team Liquid with very disappointing results, failing to qualify for the Boston Major. In the following weeks, BuLba would be replaced by GH, who officially joined in January 2017. This replacement proved miraculous, as the team's results improved drastically. Two LAN wins and several online successes meant that Team Liquid would be invited to the second Major of the season, the Kiev Major. After a 5-8th-place finish at the Major, Liquid went on to dominate international LANs for the next months in the run up to The International 2017, winning three consecutive LANs, among others the EPICENTER LAN, where they defended their title. This stellar performance was crowned by their victory at The International[8], in August 2017. After attending every single TI, KuroKy had finally done it and hoisted the Aegis after a 3-0 sweep against Newbee in the Grand Finals.