Banehallow was noble-born to the house of Ambry, the greatest of the landed castes in the old kingdom of Slom. Before the Fall, as the King's wants grew strange, and his court grew crowded with sorcerers and charlatans, the house of Ambry was the first to rise against the avarice of the throne. No longer willing to pay homage and fealty, they instead sent six-thousand swords into the capital, where they were wiped out in the Massacre of the Apostates. And then came the teeth behind the old truth: When you strike a king's neck, you had better take his head.

Enraged by the betrayal, the king exterminated the vast Ambry bloodline, sparing only the lord of the house and his youngest son, Banehallow. Before all the royal court, with the disgraced lord chained to the ornate marble floor, the King bade his magicians transform the boy into a wolf so that he might tear out his own father's throat. "Do this," the king said, "so that Lord Ambry will understand the bite of betrayal." Powerful magic was invoked, and the child was transformed. But though his body was changed, his spirit remained intact, and instead of biting the exposed neck of his father, he attacked his handlers, tearing them to pieces. A dozen of the King's knights perished under the wolf's teeth before they managed to drive it off into the night. Lord Ambry laughed from his chains even as the King ran him through with a sword. Now the heir to the lost house of Ambry, Banehallow wanders the trail as the Lycan, part warrior, part wolf, in search of justice for all that he lost.

As a man or as a wolf, Lycan devastates enemies with sharp claws and deadly jaws. Summoning stealthy wolves to scout ahead or assault a foe, his wolf transformation grants him the speed and strength to run down his enemies, or escape an ambush.

QV
Targeting
No Target
Lycan summons wolves to fight alongside him. The wolves benefit from his other abilities.
30
125/130/135/140
The very enchantment that twisted his being also summons canine familiars.
Notes

WW
Targeting
No Target
Affects
Allied Units
Strikes fear into enemies, reducing armor and attack damage to all enemies near Lycan and his wolves.
22/20/18/16
35/40/45/50
Blood-curdling wolf cries signal to opponents that Lycan is among them.
Notes

EI
Targeting
Passive
Affects
Self
Increases the damage and HP regeneration of Lycan and all units under his control.
His animalistic symbiosis with canine kind gives Lycan enhanced reflexes and hunting capabilities.

RF
Targeting
No Target
Aura
Affects
Self
Lycan assumes his true form, increasing his combat capabilities. During Shapeshift, Lycan and all units under his control are hasted, cannot be slowed, and gain critical strike.
120/110/95
105/95/80
15
100
Forever a slave to his Lycan, Banehallow has come to accept his curse, and embrace his own savagery.

DT
Targeting
Unit Target
Affects
Allied Heroes
Lycan bites an ally, granting them Shapeshift properties. Lycan and the bitten target gain lifesteal and share it as long as they are near each other.
120/110/95
150
Notes

Targeting
Passive
Affects
Self
Permanently invisible when not attacking. Given when wolves reach level 3.
Notes 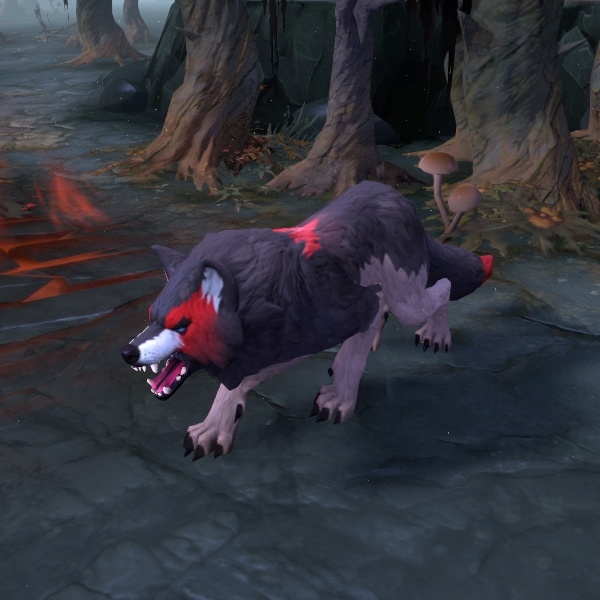