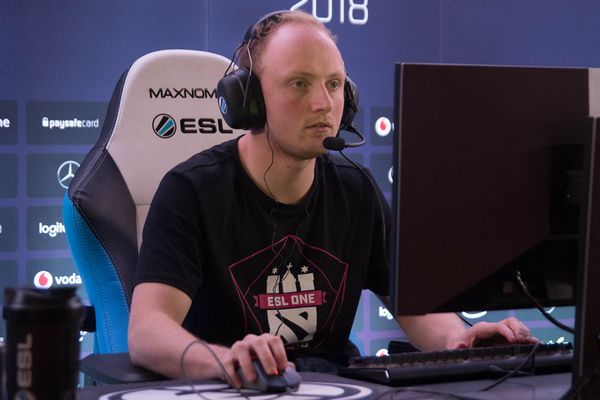 Rasmus "MISERY" Filipsen is a Danish professional Dota 2 player who is currently the captain of Hellbear Smashers.

MISERY started his professional Dota career in 2008. He is an extremely versatile player having played the hard carry role on MYM, the mid role on Counter Logic Gaming, the offlane role for Team Secret and the support role on a number of teams.

MISERY entered the professional Dota scene in 2008 with an all-Danish team called "Mom equals toilet", abbreviated "Met". The other players on the team were Smiske, AngeL, miGGel, StoDDeReN and zenition. Later they added Donald-Duck and DanishPride.[1] They finished high in a number of tournaments, including a 4th place at DreamHack Winter 2008,[1] 2nd place in Farm4Fame #3,[2] and a 4th place in MYM PriDe #10.[3] Despite being quite infamous for flaming in their games,[2] Met were nominated for a 2008 GosuAward in the category Team of the Year.[4] Met were picked up by a sponsor in March 2009 and became "Roskilde Ravens".[5]

MISERY transitioned into Dota 2 together with his team MYM to play in The International 2011. They finished 4th and took home $80,000 in prize money. Only a few days later the team decided to disband.[6] MISERY then continued his career in Evil Geniuses as they picked up a Dota 2 team in October 2011.[7] The team was sent to China to practice for two months.[7] In May 2012 he left EG to join Counter Logic Gaming, where he would reunite with former EG teammate Pajkatt.[8] Counter Logic Gaming ultimately finished 9-12th at The International 2012, the team continued to play together for a few months after TI 2 but ultimately disbanded in October 2012.

Shortly after, it was announced that he would be joining LGD.international, alongside Brax, Pajkatt, 1437, and God.[9] Upon joining the team MISERY would transition to the supporting roles, instead of playing middle which he did on CLG and moved to China with the squad. Eleven months later, on December 13th 2013, citing communication issues and failing to renew his visa, he announced his departure from LGD.international.[10] 2014 was a highly eventful year for MISERY with numerous team changes. After departing from LGD.international he joined Team Dog along with his former team-mate Pajkatt.[11] MiSeRy continued to play the support role for Team Dog. Team Dog was picked up by mousesports shortly before The International 2014[12] but ultimately they fell to a disappointing 11-12th finish. In the post-TI4 roster reshuffle the team fell apart, and disbanded without an official announcement.

After TI4, MISERY played as a stand-in for Alliance for a period of time but eventually they chose not to continue playing with him. MISERY then proceeded to play as a stand-in for Team Secret as a replacement for Fly in the offlane. He won two major online tournaments while playing as a stand-in for Secret but was ultimately replaced by Zai. MISERY then joined Cloud9 in January 2015 as their support player[13] but the team was ultimately unsuccessful and failed to win any tournaments. In August 2015, following a disappointing performance at The International 2015, Cloud9 disbanded.[14] It was announced shortly afterwards that MiSeRy, along with his former Cloud9 team-mate EternaLEnVy, would be joining Team Secret.[15] MiSeRy switched from playing the support role to playing as the offlaner for Secret. Secret's first LAN event with this new roster was at ESL New York where they finished runners up. Secret won the next two LAN tournaments they took part in, these were the first major LAN tournaments that MISERY had won since switching to DOTA 2. Team Secret then finished as runners up in The Frankfurt Major 2015 with MISERY's Slardar often warranting first phase bans. Following a string of poor performances Team Secret entered The Shanghai Major 2016 as underdogs but ultimately won the tournament. MISERY attended Dota Pit League Season 4 with Team Secret just one week after The Shanghai Major and was eliminated in the first round. Shortly afterwards MISERY and w33 were kicked from Team Secret to make way for UNiVeRsE and Arteezy respectively, the kick occurred towards the end of the roster lock period leaving MISERY with only a few days to search for a new team. MISERY and w33 formed a new team together just two days later with MISERY as captain, under the Digital Chaos organization.[16]

Under Digital Chaos, MISERY became the team's captain, and the team was able to claim first place in multiple North American qualifiers, including the qualifier for the Manila Major defeating established North American teams like Shazam and Complexity Gaming. At the Major itself, Digital Chaos lugged behind, and finished only at 9th-12th place. Winning the second regional qualifier in the Americas and their slot for the International, Digital Chaos's premier LANs heading into the tournament consistently hit only second to the last. The team, however, shocked the community as they showed a dominant group stage performance, a single point shy from dominating the bracket. Losing to Wings in the Winner's Bracket, Digital Chaos clawed their way through the Loser's Bracket, with their final match in the bracket being a victory against defending champions, Evil Geniuses. At the grand finals, Digital Chaos finished runners up to eventual champions, Wings Gaming, leaving the team with a 2nd-place finish overall.[17] Following the international break, MISERY continued with his team into the new year but due to a company restructure within Digital Chaos, the team departed for Thunderbirds that were picked up by Planet Odd.[18]

After a few months of limited success, the team disbanded and joined ppd's new team OpTic Gaming in September 2017 before arriving joining Evil Geniuses as the captain in December.[19] His tenure at the North American club lasted several months but endured a tumultous season and was later removed from the team before The International 2018 qualifiers. Moving back to Europe, he formed his own squad BlinkPool but failed to qualify for the The International 2018. Following the team's collapse, he moved to South America to join paiN Gaming as a coach for TI and following the transfer season, he was integrated into the main roster playing in the positiion five role.[20]