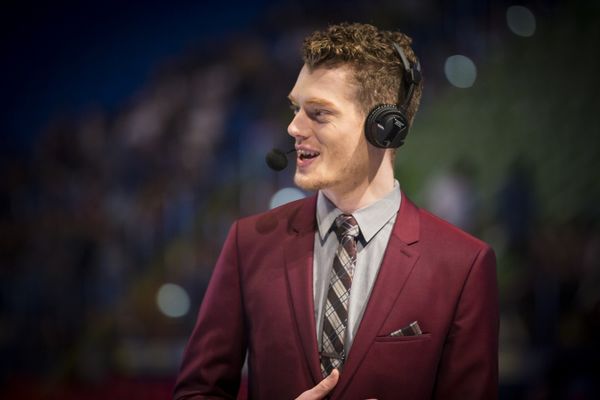 Jacob "Maelk" Toft-Andersen is a retired Danish professional Dota 2 player. He is best known for his role in the now-disbanded squad, MYM, with which he played in the original Warcraft 3 mod DotA. After leading FC Schalke 04's esports division,[1] and being the Chief Gaming Director of OpTic Gaming, he is now the Vice President of Esports at 100 Thieves.

Maelk started out in 2005 having been a part of Boomtowns WarCraft III team. He decided to try and make a team for what was then an up-and-coming custom map called DotA. The team was called Boomtown.Odense, and its original roster featured Maelk, MaNia, Crate, Paccie, and UltimatePOWER. The team won tournaments such as Pick League II, III, and IV. BTo disbanded in the summer of 2006 and some of the team's old members created lolboat.[2] Maelk created Jukes on You with Paccie, Mania, Loda, and Akke.[3] JoY won at MYM Prime, defending third place, resulting in a sponsorship by MYM.

With the MYM sponsorship in the bag, Maelk and the team became one of the absolute top teams in the world. This started with victories DreamHack Winter 2006 and the Dota Masters, as well as a second-place finish at The Pick League VI. Maelk, along with the rest of the squad won DreamHack Summer and Winter 2007. By the end of the year they won the "Fire & Ice" and achieved multiple top three finishes in other tournaments.

MYM lost their title as Dreamhack Summer Champion in 2008, where they fell short and finished in third place. After the loss at Dreamhack, the team parted ways with Levent, Fear, and ezy. To replace them, the team added PusHerStrEet.[4] Maelk and the team came back stronger than ever after this, winning ten tournaments in total, including The Pickleague VII, VIII, MYM Prime 9 and 11, and DreamHack Winter '08.

Unfortunately, MYM disbanded due to financial problems, and the line-up took on a new name as a result: Kingdom. This move was short lived, as, after a short while, all of the players agreed to disband the team.[5] Some of the players merged with Roskilde Ravens, a team with a roster that then consisted of Maelk, Pusher-Street, Mania, AngeL, Smiske, and MiGGel.[6]

The team had some success in 2009, winning ESL EMS Season 4 and ESL PremierShip Season 2. In the middle of 2009, The Ravens were picked up by MYM once again and finished the year off with victories at KODE5 and King of Kings.

In 2010, MYM did not slow down, as they attained a number of top three finishes. First, they won the Dota Pride tournament followed by a double third-place finish at both The Pick league XIII and Storm the Front. MYM followed this performance with a win at the ESL EMS Season 5. Additionally, they got to third place at the third season of Farm4fame. The rest of the year, Maelk and the rest did not accomplish any notable tournament finishes, except for their performance at the DSRack Lan #3.

In 2011 they came out on top again, winning the Intel Supercup 7, the Farm4fame season three,[7] and the Battle of Masters. The Pickleague XIV was the last tournament played in DotA 1 before the one million dollar Dota 2 tournament at Gamescom, The International. MYM came out with a second-place finish in Pick League XIV, where they lost to Team GGnet 2–1.[8] In the first game, GGnet got off to a good start, claiming early towers and KuroKy farmed a quick five minute BoT with Tinker. GGnet were controlled heavily by great ganks from MYM that allowed Spectre to carry them to victory. In the second game, MYM's Night Stalker and others were not enough to stop the early push from GGnet's top lane. GGnet got great team fights with good co-ordination, which allowed them a grand mid-push to victory. The series went to a deciding game three, where MYM's surprise pick Broodmother, could not stand up to the might of the Nerubian Weaver and the Doctor in the bot lane. GGnet were able to pull of some great counters with Silencer which helped them bring down the mid and top towers. MYM lost the final game, and GGnet became champions of the Pick League. MYM went home with 400 Euros and a second-place finish.

In August 2011, Maelk attended The International with the team Meet Your Makers for the first official showing of Dota 2. His team came out of the group stage with the first seed after beating MiTH.Trust and MUFC. They then played Team Zenith. MYM lost a nerve-racking 62-minute game and fell to the losers bracket where they faced MiTH.Trust to advance. They beat MiTH.Trust, and then their toughest opponent in the competition yet, iG. That game was a display of total dominance from MYM and it sent iG out of the tournament. Next up was EHOME, a long-time Chinese powerhouse that struggled against MYM but eventually beat them and sent them out of the international with a fourth-place finish and the relatively small sum of $80,000 USD. After The International, MYM was the first team to disband.[9]

We have reached the end of an era, and everyone agreed that inorder for us to prepare for the future and meet each our individual dreams and goals we needed to start from a clean slate. For many of us, MYM has been as much a part of our identity in DotA as our own nickname has, but we are confident that moving on is for the best.
The players will finish the year off by doing different things. Some will continue playing competitively while others are taking a break from the pro circuit. Some has obligations outside of the game that they cannot ignore while others wants to focus fullheartedly on DotA for the rest of the year.
Once the new year starts and DotA2 launches, we will most likely meet up and join forces once again!
Maelk, captain of MYM

After several months of not seeing anything from Maelk, rumors stating that was going to be picked up by Evil Geniuses started to spread. After sometimes acting as a stand-in for some the team, it was announced that Maelk would in fact be picked up by EG and that he would be joined by former MYM teammate, Jimmy "DeMoN" Ho.[10] Maelk and his new teammates made their first steps together in The Defense Season 1. They delivered an encouraging performance, finishing second in the first group stage just after Ariana Gaming. Going into the second group stage EG, again showed good performance with a finish just behind the The International 2011 champions Na'Vi. Evil Geniuses ended up in third place after losing to Quantic Gaming in the losers bracket.

After participating in a number of different tournaments, such as The Defense Season 2 and DreamHack Summer 2012, Maelk and the rest of Evil Geniuses were invited to The International 2. The team had a rough start in the tournament, losing to DK (2-0) and LGD (2-0). They ended their losing streak by beating Zenith (0-2) and later continued to beat all of the European teams that they faced. However, they lost to all of the Asian teams except for Zenith. Maelk and the team ended up as the fourth seed in their group, having won eight of their matches and losing six. In the playoffs, Maelk met the team that he sent home from the last International, iG, who, this time around looked much stronger than last time. iG won the first game, but EG came back in the second game. In the deciding game, EG lost to a strong play from iG, and were sent to the losers bracket, 2-1. In the losers bracket they would have to pull off quite a feat as they were matched-up against the Chinese team, TongFu, who seemed to be the weakest of the Chinese teams. EG lost against TongFu 2-1 and were sent out of the tournament with no prize money and a 10-14th-place finish.

In November, Maelk, along with the rest of EG, traveled to Sweden for another try at grabbing first place at DreamHack Winter 2012. They started out against Rigg3D, beating them quite convincingly, and then went up against Maelk's old teammate, Loda, with his newly formed team No Tidehunter. Evil Geniuses lost to NTH and ended up as the second seed in the group after beating 4FC. Going into the quarterfinals against the fan favorite Na'Vi did not prove to be a problem for the team as they beat Na'Vi 2-0 and sent them out of the tournament. With a lot of confidence, EG would played against the ex-HoN squad Fnatic.EU, and again EG showed that it had no problem as their beating Fnatic 2-0. In the finals, EG once again matched-up against nth. EG started out by taking first game quite convincingly, but No Tidehunter came back and won the series with a 2-1 secore. EG went home with kr 50,000 SEK (~$7,750 USD) and a second-place finish.

In the first months of the new year, Maelk and the team struggled to accomplish anything, experiencing massive inconsistencies in performance. Despite a win in the EIZO monthly cup in February, the team continued to slump. In May, after EG was not directly invited to The International 2013, Maelk announced his retirement as a player and moved into a managerial role within the team. He was replaced by SexyBamboe, who had already played for EG numerous times as a standin.

I am happy to say that I am quitting the competitive circuit, and will instead shift my focus to a new managerial role within Evil Geniuses. After nine years of playing Dota competitively I have long thought about stepping back as a player and instead directing my passion elsewhere. We’ve been looking at the roster for a few weeks now, and I am confident the team will succeed in the qualifier for The International and continue to deliver the results fans have come to expect from the team. I would like to thank both the community and the team for their constant support. I wouldn’t have been able to do this for so long if it weren’t for the support of fans and people in the industry.
Maelk, at the time of his departure as captain of EG